UFC Hall of Famer and Five-Time Champion Talks Toney, The Expendables
and UFC 118 In the Latest UFC Issue 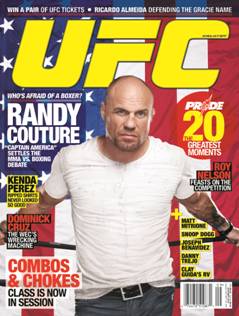 Las Vegas, NV (USA) – It’s already been a whirlwind year for five-time UFC® champion Randy Couture, with a win over fellow Hall of Famer Mark Coleman in February, a role in the highly-anticipated film “The Expendables” this summer, and an impending battle with James “Lights Out” Toney coming up in August.  So when he recently witnessed the unveiling of his UFC Magazine cover at his gym in Las Vegas, it was another milestone in a 2010 to remember for “The Natural”.

“I have a pinch me moment all the time,” Couture said. “I’ve had a blast in this sport for the last 13 years. This year’s been a pretty remarkable year – getting to work with (Sylvester) Stallone in a movie, stuff like this with the cover. It’s pretty cool.”

Indeed, fight fan favorite “Captain America” is front and center on the August/September 2010 issue of UFC Magazine..  But that’s not the only stage he’s holding right now, all eyes are on him as he prepares to be the first-ever UFC fighter to go head-to-head with a former world boxing champion in the form of  “Lights Out” Toney.

Couture and Toney will meet August 28th in the co-main event of UFC 118 in Boston, in what is being billed as a UFC vs. Boxing mega-fight to settle the score once and for all as to which fighting style reigns supreme.

Couture is a living legend that continues to shock and awe fans and experts, as well as his opponents. The 47-year old looks to welcome Toney to the Octagon™ and see if the UFC’s newest high-profile addition has grown a ground game.  Toney can talk the talk, but can he walk the walk? In this UFC Magazine interview, Randy elaborates on the boxing legend’s strengths, weaknesses and wisecracks.

Also in the current issue of UFC Magazine, Kenda Perez, host of Spike TV’s Best of PRIDE®, tears up a six-page pictorial in vintage PRIDE shirts and talks about life, love and the greatest moments of head-stomping.

UFC Magazine debuted in June of 2009, and quickly shot up the retail charts to become one of the best-selling men’s magazines on the newsstand. UFC Magazine is sold at more than 40,000 different retail locations across the country.