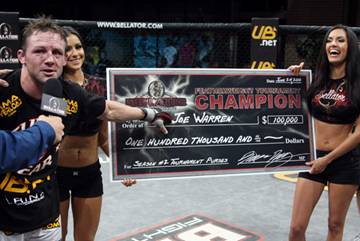 The sold-out event at Louisville’s Fourth Street Live downtown entertainment district tied a ribbon on Bellator Season 2 in fitting fashion as fans were once again treated to a full card of electrifying fights that also included shocking upsets at bantamweight and in a Women’s Feature Fight.

But the night undoubtedly belonged to Warren and Shlemenko, whose victories earned them $100,000 in prize money and the chance to fight reigning Bellator World Champions Joe Soto and Hector Lombard, respectively, in world title fights this fall.

Shlemenko, a 26-year-old army combat fighter known for his reliance on spinning back-fists and leg kicks, came out swinging in his typical style from the opening bell. But it was a far-more-conventional right hook to the jaw that eventually finished the heavily favored Bryan “The Beast” Baker roughly mid-way through Round 1.

The devastating punch left Baker (13-2) dazed and slowly crumpled him to the canvas before Shlemenko moved in for the finish with a flurry of punches. Referee Jason Herzog stopped the fight due to unanswered blows at 2:45 into Round 1.

It was just the second time that Baker had suffered a loss as a pro with the other coming at the hands of UFC star Chael Sonnen more than two years ago.

“We had heard that Alexander Shlemenko was one of the best middleweights in Europe and he definitely proved that here tonight,” Bellator founder and CEO Bjorn Rebney said afterward. “He beat a very, very talented fighter in Bryan Baker and he’s more than earned the right to face our champion Hector Lombard later this year.”

Shlemenko, for his part, said the win was also a statement on behalf of all pure strikers in MMA today.

“This victory means that strikers soon will be all over MMA and that Bellator Fighting Championships will be owned by the strikers,” he said through his translator.

Warren, meanwhile, took a far-more-circuitous route to his title. The 33-year-old former NCAA all-American and Greco-Roman wrestling world champion, appeared to be all but finished near the end of Round 1 when his opponent, the previously undefeated Brazilian jiu-jitsu black belt Patricio Pitbull, dropped him to the canvas with a right cross and then began a vicious ground-and-pound before Warren was saved by the bell.

But Warren rebounded in remarkable fashion during Rounds 2 and 3, digging deep and using his world-class wrestling skills to score points with a series of takedowns that were each followed by relentless ground-and-pound attacks punctuated with sharp elbows and stiff forearms to Pitbull’s head.

The split decision victory was even more impressive given that Warren spent much of the day battling a stomach virus that left him unable to keep food down or maintain his balance.

“I feel tired but I’m very happy now,” he said after the fight. “I fought a great fighter in Pitbull and now I’m the champion. I’m the baddest man on the planet!”

Rebney agreed, saluting Warren’s resilience and his will to win even in spite of his illness.

“He showed up tonight with a sickness that would have put a lot of people in the hospital and beat a world-class fighter and put on the kind of performance that you just can’t script,” he said. “What he did tonight was just epic and very, very impressive.”

Earlier, in the first televised fight of the night, Fresno, Calif.-based striker Zoila “The Warrior Princess” Frausto scored a huge upset with a first round knockout of the world’s top-ranked 125-pound female fighter, England’s Rosi Sexton.

At just two minutes into Round 1, Frausto (7-1) landed a left knee to Sexton’s chin, knocking her unconscious and dropping her to the canvas before finishing her with three straight right hands to the jaw. It was just the second career loss for Sexton in 12 pro MMA fights.

“I saw the opening and I just threw the knee up,” Frausto said afterward, adding that she thinks she now deserves to be ranked No. 1 in the world at 125. “I’ve been shooting for No. 1 since I got into the sport. This is exactly why I got into MMA.”

Also Thursday, in what was billed as an “Eliminator Bout” to determine the latest entrant into Bellator’s forthcoming Season 3 Bantamweight Tournament, two-time Wyoming state high school wrestling champion Nik “Garfield” Mamalis scored his second consecutive Bellator victory to improve his pro MMA record to 10-4 and punch his ticket into the tournament’s eight-man field. The soft-spoken Mamalis used an aggressive attack to neutralize L.A.-based rising star Albert Rios (12-5) via TKO at 4:40 into Round 1.

Afterward, Rebney said that Mamalis had more than earned his place in the Bantamweight Tournament draw.

“That’s what Bellator’s all about,” Rebney said. “it’s about giving a guy like Nik who hasn’t had a chance on the big stage the opportunity to that and then he takes that opportunity by the throat.”

The evening also played host to four non-televised “Local Feature Fights” showcasing top rising stars from Louisville, Cincinnati and Southern Indiana. The results of those fights are as follows:

Bellator returns to TV in August for its much-anticipated third season, which will feature eight-man tournaments at bantamweight and heavyweight as well as a first-of-its-kind Women’s Tournament showcasing eight female fighters ranked among the top 10 in their respective weight classes.

Each fight will once again be broadcast LIVE in primetime on Fox Sports Net and during special taped highlight shows every Saturday night on NBC, Telemundo and the cable network mun2.