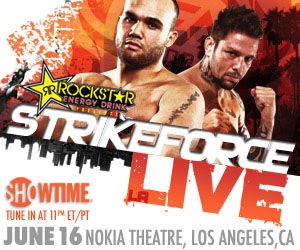 Lawler (17-5) will collide with former STRIKEFORCE Light Heavyweight (205 pounds) Champion Sobral (35-8) at a catch weight of 195 pounds in the main event.

Lawler, 6-1-1 with one No Contest in his last eight outings, is coming off a dramatic, come-from-behind 3:33, first-round knockout over highly regarded Melvin Manhoef on Jan. 30, 2010. Sobral’s start will be his first since losing his STRIKEFORCE belt to Gegard Mousasi on Dec. 19, 2009.  Prior to the defeat, Sobral had reeled off five consecutive victories.

The first-ever STRIKEFORCE event scheduled for mid-week will take place in the midst of the E3 Expo, the premier trade show for computer and video games. During E3 Expo 2010 at the L.A. Convention Center, EA SPORTS™ will exhibit its highly anticipated title, EA SPORTS MMA, in which STRIKEFORCE is featured as a premier league.

The principal fighters on the June 16 fight card, including Lawler, Sobral, Evangelista Cyborg, Marius Zaromskis and Tim Kennedy, are all featured in the EA Sports MMA title.

What the fighters had to say on Wednesday’s call:

SCOTT COKER: “We’re happy to have the fight between Robbie and Babalu and we’re looking forward to a great fight.  That fight is going to have a lot of implications.  I think that that fight, the winner, if Babalu wins and looks good, he will be first in line for a matchup against King Mo (Muhammed “King Mo” Lawal).  Robbie, if he wins the fight, will be first in line to have a title shot at 185 against (Ronaldo) “Jacare” (Souza).  Normally, we don’t put those fights out there, but I just wanted to let everyone know that this fight will have consequences and it will be an interesting show and we’re looking forward to putting it on.”

ROBBIE LAWLER: “Training is going good. I’m down in Arizona for fight camp.  I’m just working real hard, working on my skills and looking forward to having a good show.”

BABALU SOBRAL:  “I look forward to this fight.  It’s going to be in California, my backyard, so it’s going to bring a lot of fans in.”

With all the middleweight tournaments that you are having, could the winners be in a potential tournament?

COKER: “That is still to be determined. It hasn’t been mapped out 100 percent, but we’ll probably have an announcement in the next 10 days or so.”

Babalu could potentially face King Mo, but he’s recently said that he wouldn’t want to fight him because of their relationship.  Is that true?

RICHARD WILNER (Babalu’s Manager) “Yes and no.  For what it’s worth, if the question is ‘are we looking for a fight with Mo,’ with all do respect, the answer is no because of our relationship with Mo.  If that’s the fight on the table because the fans are clamoring for it, then we’ll do what we have to do.   If the question is ‘who do we want to fight,’ I could easily answer that question – and the answer is Dan Henderson and Gegard Mousasi.”

As far as Jacare goes, you said Robbie Lawler would face him for the title.  Is Jacare absolutely locked to fight for the title next, regardless?

COKER: “This depends on how things shake out with Jake (Shields).  If we end up in a situation where we’re looking for a 185-pound champion, I think Jacare would be a No. 1 or No. 2 seed in the slot.”

Babalu, how is your training going considering Robbie has such good power?

BABALU:  “I’ve been working hard.  He’s a great striker and, as everybody knows, I don’t try knocking people out, so I have to defend from that.”

Robbie, how is your submission defense coming?

Babalu, how are you preparing for this fight after almost one year of not fighting?

BABALU:  “Well, I took a little time off.  I have been going to the gym; I’ve been prepared all along.  I was supposed to fight in DREAM, but that go cancelled and STRIKEFORCE offered me this opportunity.  I just had to push the training a little bit more.  It’s been good training.  I’ve had a very, very amazing camp.”

Scott, will the winner of the Fedor-Werdum fight get a shot at (Alistair) Overeem?

COKER:   “When the fight is over, should Fedor be victorious, we will definitely be sitting down with M-1 to try to put that fight together.”

Scott, how is this type of event different for STRIKEFORCE?

COKER:  “Basically, what happened was E3 was on the books about six months ago and EA Sports was putting out this MMA game. They asked us if we could put together some sort of event.  We said, why don’t we do a fight and it will be our first real time in the Los Angeles market with SHOWTIME.  We thought this will be a fun opportunity to do something in conjunction with EA Sports as part of the E3 convention.  Then we started thinking about what type of card we’d bring there.  Would we bring a Challengers card, do we have the available space (for a big card)?  There was really a tight, tight grip on a lot of the venues there, so we couldn’t pull a big arena show.  We talked to Ken Hershman and thought about doing a hybrid-type of show, and he gave it the green light.  It’s kind of a sampling where you’ll have two fights on the undercard, it’s not going to be a fight where we normally have four or fight undercard fights, it’s a little bit later of a start time, but you’ll get to see some of the best and some of the up-and-coming guys who are trying to keep their value up.”

How is the LA market treating you so far?

COKER: “Ticket sales are terrific; I think we’re about 2/3 there (to sell out).”

Robbie, you’ve been knocking a lot of guys out, but your last couple of losses were by submissions.  How are you going to approach Babalu, who is a submission specialist?

LAWLER: “Really, I’ve just been doing what I normally do: working on all my skills, striking, grappling, wrestling, just trying to build everything at the same time.  (Against Jake Shields) I got caught in a submission, it was tight and I made a mistake. It was an easy mistake to fix and that’s what I’ve been doing.  I grapple as much as I do anything else, so I’m not leaving anything behind.  I’m working on all my skills.”

Babalu, your last fight in STRIKEFORCE you lost by knockout to Mousasi.  What have you done to improve your standup and striking for Robbie?

BABALU: “The only thing that I changed a little bit because Robbie is southpaw is I’ve been training more southpaw then I used to train. That’s the only difference.

“Sometimes it’s good to get your ass kicked, and sometimes it can come back to haunt you. Mentally, I’m more prepared for this. I can’t wait to come back and fight.  I’ve improved more, but I can strike too.  There’s no secret to my game. I’ve fought everybody under the sun.”

Robbie, can you talk about the difference at fighting at 195 pounds and what your preparation is?

LAWLER:  “I’m not too worried about my weight. I decided that I’d just eat whatever I’d want to and not worry about my weight.  I tried bulking up, adding more fluids and taking a little more supplements than usual.  If I was going to weigh 190, I’ll weigh 190.  If I weigh 195, that’s fine.  I’m just going to work hard and that’s what I’ve been doing.”

Babalu, what’s the difference in your approach at 195?

Facing a striker after the way you lost last night, what’s your thought?

BABALU:  “I lost my last fight, but that wasn’t because I punched in the head.  He tripped me and took me down.  I was on the ground, it wasn’t because I was weak.  I will come back strong from the loss.  I want to get back to my winning track.”

Robbie, your last fight was a tremendous and grueling fight.  How long does it take for you mentally and physically to get over that fight?

LAWLER:  “Physically a little bit longer. Once I got out here to Arizona I started pushing it a little harder, and that’s when I started feeling really good. Mentally, I was ready to go. I’m always mentally there where I believe in myself and I believe I can beat anyone – that’s easy.  The physical part is always the part where you need to work hard and get back into shape and that’s what I did.”

How would you rate that victory (over Melvin Manhoef) over your other victories in your career?

LAWLER:  “I think it was one of my biggest because everyone knows what kind of striker he is.  Everyone said I should have taken him down, which maybe I should have.  But to knock him out standing and to beat him on his feet, where he’s supposedly one of the best in the world, felt good.”

Babalu, do you feel any added pressure in this fight because of the extra time off and because a title shot is on the line?

BABALU: “There’s always added pressure. The pressure is always on.  The next fight is always the most important fight in your life.”

Robbie, do you think there’s some advantage because he has taken some time off and is coming off of a loss?

LAWLER:  “No, I don’t look at that as an advantage.  Sometimes, taking time off you come back stronger and you’re able to look at what you need to work on and you’re fresher when you come into the fight. It all depends on the individual and how they train if it’s a benefit. I’m ready to go – that’s all I can control.”

Babalu, what would you say your strengths or advantages are going into this fight?

BABALU:  “Normally, I would say my submission skills.  But, I don’t know.  I don’t think I have any advantages. I’ve just been training really hard and feel comfortable with what I’ve done.  I’m just trying to get as mentally and physically prepared as I can to get the job done so I can come back to my house and kiss my family.”

Robbie, what would you say your strengths or advantages are going into this fight?

LAWLER: “I don’t really want to talk about my advantages, but, as far as my strengths are, I’m mentally prepared.  I’m ready to go; I’m physically ready to go.  I’ve been training real hard.  Babalu is a really good opponent; he’s fought everyone it seems at different weights.  So he’ll be ready to go and I’ll be ready to go.”

Babalu, how many times ideally would you like to fight each year?

BABALU: “Without injury I can fight every week.  But I used to fight 12 times in one year back in the day. Honestly, every four months is perfect.  I don’t know if that’s possible, but that’s the dream.”