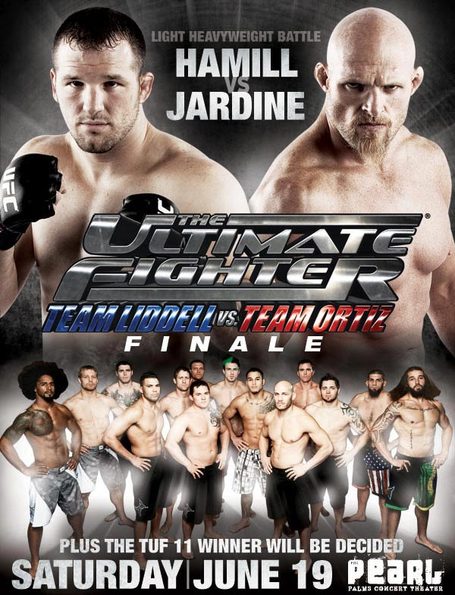 LIVE Saturday, June 19 At 9:00pm From The Palms In Las Vegas

New York, NY, June 10, 2010 – The finals are set for “The Ultimate Fighter: Team Liddell vs. Team Ortiz” as Court “The Crusher” McGee and Kris “Savage” McCray emerged last night to compete for a six-figure contract with the preeminent mixed martial arts organization in the world, The Ultimate Fighting Championship®.  Emanating from The Pearl at the Palms Casino Resort in Las Vegas, NV, the finale will be telecast LIVE on Spike TV Saturday, June 19 at 9:00 PM ET.

Fighting out of Orem, UT, Court McGee (10-1) is aiming to complete one of the most miraculous comebacks in the history of mixed martial arts.  McGee is a former heroin addict who was actually once pronounced dead by EMTs when they arrived on the scene after an overdose in 2005.   McGee emerged from a six day coma after the incident and went through an extensive physical rehab program, relearning basic motor skills such as walking.  Wrestling, karate and jiu jitsu were a pipe dream at the time, yet five years later, McGee stands at the precipice of becoming “The Ultimate Fighter,” with his opponent McCray the only thing standing in his way.  The next-to-last pick by Team Liddell, McGee dropped his first bout on the show via a razor thin decision in a war with Nick Ring, but, like in life, received a second chance.  Filling in for an injured Rich Attonito, McGee defeated James Hammortree via guillotine in the second round of their quarterfinal matchup, and garnered a spot in the finals by defeating Brad Tavares with a rear naked choke with only 18 seconds left in the third round of their semifinal slugfest to move onto the finals.

Training in Dumfries, VA, Kris McCray (6-0) was born to a military father, and was raised in Germany, where he excelled in basketball, badminton and soccer, garnering All-Europe honors soccer at Ansbach American High School.  It was in Germany where his interest in MMA was sparked, watching karate movies and imitating the moves.  In 1999, McCray moved permanently to the United States, graduating from Woodbridge Senior High School in northern Virginia while earning a varsity letter for wrestling. Upon graduating, McCray enrolled in Northern Virginia Community College, earning his Associates Degree in General Studies in 2001.  While enrolled there, McCray began serving in the US Army Reserve, where he spent 8 years (6 active, 2 inactive).  Towards the end of his time in the Army Reserve, he began training in jiu jitsu at Gold Medal Grappling in Woodbridge, Virginia, which set him on the path that he is on now.  Like his opponent in the finale, McCray, a member of Team Ortiz, also received a second chance on the show after dropping his first bout, being selected as the wild card because of his impressive showing in a three-round loss to Josh Bryant.  He defeated fellow wild card selection Kyacey Uscola to get back into the competition, then took out number one overall pick Kyle Noke via decision in the quarterfinals and avenged his loss to Bryant via unanimous decision in the semifinals to punch his ticket for the finals.

The Spike TV nationally televised card kicks off with a middleweight bout featuring “The Ultimate Fighter: Team Ortiz vs. Team Liddell” contestants Rich Attonito and Jamie Yager.  In episode 4, Attonito (7-3) was awarded a victory over Kyacey Uscola via disqualification but broke his hand and was unable to continue on his quest to become “The Ultimate Fighter.” Now fully recovered, Attonito is currently training with American Top Team in Florida.

Jamie Yager (2-1) impressively knocked out Charles Blanchard in one minute and eight seconds in their bout in episode 4, but was unable to answer the bell in the third round of his intense battle with Josh Bryant in episode 10.  Fighting out of Los Angeles, Yager was a standout varsity letterman in baseball and football and was the 2001 Athlete of the Year at South Pasadena High School in California.

Headlining the Spike TV card will be the previously announced battle of UFC light heavyweights Keith Jardine and “The Ultimate Fighter” alum Matt Hamill, a middleweight bout between Aaron Simpson and Chris Leben, and a lightweight matchup pitting Dennis Siver against Spencer Fisher.

Other matches on the fight card include (might air time permitting):

Last night’s “The Ultimate Fighter” semifinal bouts featuring Josh Bryant vs. Kris McCray and Court McGee vs. Brad Tavares can now be seen in their entirety on ultimatefighter.com.