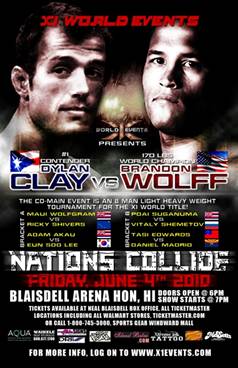 Honolulu, HI (USA): Top Hawaiian fight promotion X-1 World Events is proud to announce their next amazing MMA event, “Nations Collide,” which will take place on Friday, June 4th, 2010, at the famed Blaisdell Arena in Honolulu, Hawaii. The fight card will feature combatants from all over the world, including Hawaii, Puerto Rico, Russia, Korea, Samoa, Alaska, South Korea, and Japan, and some top young bantamweights, featherweights, light heavyweights, and welterweights will showcase their skills. In addition, “Nations Collide” will showcase the talents of Olympic gold medalist Satoshi Ishii, a Japanese national hero who finished first in judo at the 2008 Games.

Doors to the Blaisdell Arena will open at 6 PM, and the fights will begin at 7 PM. Tickets are available at the Blaisdell box office, all Ticketmaster locations, through Ticketmaster.com, and on the phone at (800) 745-3000.

The main event of “Nations Collide” will feature an X-1 World Welterweight Championship bout between Hawaiian favorite Brandon Wolff (7-4 with three KO/TKO’s) and Dylan Clay (7-2 with five submissions). Wolff, the champ, is a veteran of the UFC, EliteXC, and K-1, and has faced top-flight competition such as Riki Fukuda, Chad Reiner, Ben Saunders, and Yoshiyuki Yoshida. Looking to lift the strap from the Hawaiian will be Clay, a native of Puerto Rico. A submission fighter, Clay defeated UFC veteran Ronald “The Machine Gun” Juhn in his only X-1 appearance, and has also fought in M-1, where he faced Brazilian fighter Eduardo Pamplona. This highly-anticipated scrap will determine welterweight supremacy in X-1.

The co-main event will showcase a light heavyweight tournament that will determine the new X-1 World Light Heavyweight Champion. The first round of the tourney will take place at “Nations Collide,” with the semi-finals and finals occurring on subsequent shows. Participating in the tournament will be Alaska’s Ricky “Ice Cold” Shivers (8-5-1), a veteran of X-1, Ryan Wong (2-1), Adam Akau (3-1), South Korean PRIDE veteran Eun Soo Lee (14-2-0-1), former EliteXC headliner Poai Suganuma (9-3), Western Samoa’s Tasi Edwards (1-0), King of the Cage veteran Daniel “Blackout” Madrid (6-1), and Russia’s Vitaly Shemetov. One of these exemplary fighters will become the new X-1 lightweight kingpin, but whoever takes the belt will have a tough time getting there. It’s a talented group with some deep experience.

Also fighting at “Nations Collide” will be 2008 Olympic gold medal-winner and Japanese submission sensation Satoshi Ishii (1-1). This celebrated judoka made his MMA debut at K-1’s New Years Eve show at the end of 2009, losing by unanimous decision to fellow former Olympic gold medalist and Japanese MMA legend Hidehiko Yoshida. However, this past weekend, Ishii got his first MMA win, submitting Tafa Misipati via armbar in New Zealand. At “Nations Collide,” Ishii will compete in his next MMA bout against Myles Tynanes (0-0). Seen as the next great Japanese judo player to carry on the strong tradition started by Yoshida and Makoto Takimoto, Ishii has drawn a lot of attention for his amateur background and skills, as well as his national celebrity status.

“This fight card is one of the best we’re going to see this year. It shows that X-1 is committed to bringing in the best fighters not just from the Islands, but from around the world,” said Mike Miller, Owner/Promoter of X-1 World Events. “Fight fans are in store from some hot action as the Hawaii summer gets going. I can’t wait to see who wins the welterweight belt, and who advances in the light heavyweight tournament. And don’t forget that we’re bringing an Olympic gold medalist to the Islands!”

Here is the full fight card: