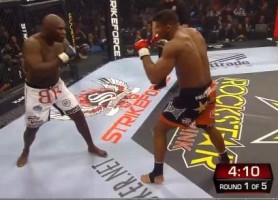 ST. LOUIS, Mo. – Alistair “The Demolition Man” Overeem lived up to his moniker Saturday night by demolishing Strikeforce heavyweight contender Brett “The Grim” Rogers with a first round assault that would make Jeffrey Dhamer cringe.

“Strikeforce: Heavy Artillery” took place Saturday, May 15, at the Scottrade Center in St. Louis, Mo. The main event featured the return of Strikeforce’s heavyweight champion Alistair Overeem , who had not fought in the United States since he won the title by defeating Paul Buentello in Nov. 2007.

The challenger was Brett Rogers, a beast of a man with 10 wins and 10 finishes. Rogers lacked the experience of Overeem, but he had gained the respect of the MMA world by finishing all but one of his opponents and knocking out former UFC heavyweight champion Andrei Arlovski in June 2009.

The only fight Rogers had not won was his most recent fight, which happened to be against Fedor Emelianenko, considered the number one heavyweight in the world. And although Fedor eventually won the fight, Rogers gave him what most consider the toughest battle of his long and now legendary career.

Just as Rogers is known as a finisher, so is Overeem. Overeem had 32 wins on his record coming into this fight, and had stopped 31 of his opponents. Those kind of stats are basically unheard of in the MMA world. Even more impressive is the fact Overeem is equally dangerous, if not more so, on the ground as he is standing.