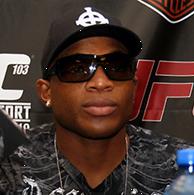 MONTREAL, Canada – Following a third round unanimous decision loss to Josh Koscheck at UFC 113 at the Bell Centre, England’s Paul Daley has been released from the Ultimate Fighting Championship according to UFC President Dana White. However, he was not fired because he lost the fight, but rather due to his actions following the fight.

Koscheck repeatedly took Daley to the ground during each round, and as the final bell sounded to end the fight and the fighters stood up off the ground, Daley swung and hit Koscheck in the face. Referee Dan Miragliotta immediately grabbed Daley and pulled him away to take control of the situation.

White commented on Daley’s actions at the post-fight press conference:

“He’ll never come back. I don’t care if he’s the best 170-pounder in the world. He’s never coming back here. There’s no excuse for that. You never hit a guy like that after the bell.”

Koscheck was a guest on ESPN 2’s MMA Live after the fight and talked about the incident. He said he had been talking to Daley for about the last minute of the fight. He did not say specifically what he said to Daley, but it was obviously some sort trash talk. Regardless of what Koscheck may have said to though, it does not excuse Daley’s unprofessional actions.

Due to his win, Koscheck earned himself a spot as a coach opposite welterweight champion Georges St. Pierre on season 12 of “The Ultimate Fighter.” He will also have the next shot at St. Pierre’s welterweight title.