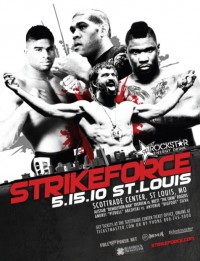 It will be the most important fight of his career for the fast-rising Britt, of Virginia Beach, Va., who’s won four of his last five, including a dominant performance in his STRIKEFORCE debut last Dec. 19 when he repeatedly dropped Scott Lightly until the one-sided proceedings were halted by the doctor after the first round.

On May 9, 2009 – Britt’s 31st birthday – he overwhelmed UFC veteran Antonio Mendes with a flurry of blows, winning the fight in just eight seconds, which is hardly enough time to touch gloves.

“I just kept pumping, you can’t attack if you’re backing up,” said the 6-foot-1 Hybrid Academy of Martial Arts-trained fighter who has registered victories in less than two minutes on seven different occasions. “Right cross, right elbow. Boom, dropped him. That was it.”

Britt was a contestant on season eight of The Ultimate Fighter, but a broken hand suffered during a victory in his elimination bout forced his withdrawal from the competition.

Feijao, a devastating striking with a fierce killer instinct, has produced all eight of his wins inside the distance.  He trains out of the famed Black House camp with Anderson Silva, Lyoto Machida and Antonio Rodrigo Nogueira.

In 2007-‘08, the six-foot-one-inch, 29-year-old Feijao of Sao Paulo, Brazil was viewed as one of the most promising prospects in MMA.  He was slated to challenge then-STRIKEFORCE light heavyweight titleholder Renato “Babalu” Sobral last June 6, but Sobral withdrew because of the impending birth of a child.

Due to the circumstances, Feijao was matched against Mike “Mak” Kyle, who manufactured a colossal upset when he defeated Feijao via second-round TKO.

Until the Kyle stunner, Feijao, which means “bean” or “beans” in Portuguese, had steamrolled his opposition. His only other loss came on a disqualification on June 16, 2007.

Feijao rebounded from the shocking setback and regained his winning ways with an impressive second-round TKO (punches) over Aaron Rosa on the STRIKEFORCE Challengers event last Nov. 20. After an unhurried opening round, Feijao turned up the heat in the second, battering Rosa with a series of strikes until the fight was halted at 3:25.

Ribeiro, a 30-year-old Brazilian Jiu-Jitsu specialist, is among the top lightweights in MMA. He’s won the Brazilian Jiu-Jitsu World Championship four times, once as a purple belt in 1996 and three times as a black belt in three consecutive years (1999-2001).

Among his 20 victories include 14 stoppages (12 by submission) while topping notables such as Joachim Hansen, Eiji Mitsuoka, and Mitsuhiro “The Endless Fighter” Ishida.

Ribeiro’s losses have come against some of the division’s most talented fighters — Tatsuya Kawajiri, Gesias “GZ“ Cavalcante and, in his last start on a decision to then-No. 2 in the world, Shinya Aoki, in the DREAM Grand Prix finals last July 20.

Afterward, Ribeiro underwent successful eye surgery, but he is back to 100 percent and has pronounced himself fit and ready. “I’ve been training and I’m motivated to get back to fighting regularly again,’’ said Ribeiro, who credits his mentor, André Pederneiras, for his success.
Beerbohm  is not your prototypical mixed martial artist. A top up-and-coming fighter who is also a feel-good story, he literally started MMA on his way home from prison after he spent a year and one day at the Washington State Penitentiary in Walla Walla as a result of felony convictions, all related to his crystal meth addiction.

The same day the 5-foot-10, 31-year-old native of Spokane, Wash., got out of prison, he was at a Jiu-Jitsu gym. He had his first amateur fight eight days after being released.

Despite the many obstacles, Beerbohm went 12-0 in the amateurs and has been flawless since turning pro on April  6, 2007. In his last outing, he registered an 89-second, first-round TKO (elbows) over Josh Martin on Sept. 12, 2009. In a career-best performance, he submitted (bulldog choke) veteran star Duane “Bang” Ludwig at a STRIKEFORCE Challengers event on June 19, 2009.

“After watching MMA on TV, I knew deep down inside that’s what I was going to do.’’

A top wrestler in high school, Beerbohm is a brawler who can switch between southpaw and orthodox stances. Of his 12 amateur fights and 13 pro bouts, only one has gone the distance. He has recorded more  KO’s than submissions, but he still considers himself a grappler.

Beerbohm, whose nickname is derived from the custom-made trunks sewn by his mother, wants  to defeat Ribeiro and then challenge for the STRIKEFORCE lightweight title. “That’s my goal,’’ he said. “I want to be the champ. I want a five-round fight. That would be something else.’’

Doors at Scottrade Center will open for STRIKEFORCE St. Louis:  Heavy Artillery at 6:15 p.m. CT on Saturday, May 15. The first non-televised preliminary bout will begin at 7 p.m.

The event will be televised live on SHOWTIME® at 10 p.m. ET/PT (delayed on the West Coast). Shamrock Promotions is assisting STRIKEFORCE with local marketing for the event.