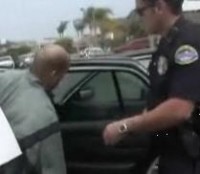 HUNTINGTON BEACH, Calif. – Tito Ortiz, UFC fighter and coach on this season’s “The Ultimate Fighter” on Spike TV, has been arrested for alleged domestic violence at the home he shares with girlfriend Jenna Jameson, according to TMZ.com, who first reported the story earlier today.

Although not married, Jameson and Ortiz live together and she is the mother of his twin boys.

A 9-1-1 call was placed at 9:53 a.m. by Jenna Jameson’s father, who said he was at the house when the incident happened. Jameson’s father also says a restraining order has been filed against Ortiz.

The OC Register says Ortiz has been released on bail.

Jenna says she is okay, but is pressing charges, and Tito is in jail.

UPDATE 7:57 p.m. CT – RadarOnline is reporting in an exclusive interview that Jenna Jameson has decided to “work it out for the sake of the kids”.

UPDATE 8:17 p.m. CT – RadarOnline is reporting Tito is out on $50,000 bail, and Jenna suffered a torn ligament in her shoulder.