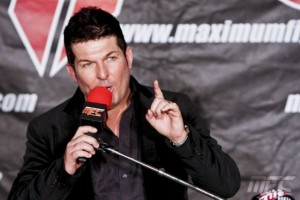 The hype for MFC 25: Vindication is starting off with a huge bang as Maximum Fighting Championship Owner/President Mark Pavelich is headed to Toronto for a media blitz.

It all starts off Tuesday, April 13 when Mark returns to TSN for a follow-up appearance on the highly popular round-table talk show “Off The Record with Michael Landsberg.” Having been a guest before, Mark is always up to the challenge to discuss the latest happenings in the world of sport and he’s ever-eager to defend his point of view against the rest of the panel. The episode will air at 6 p.m. ET/4 p.m. MT/3 p.m. PT on April 13. Mark also has a little surprise in store for those who recall his last visit when talk turned to wagering high-end watches over NHL predictions.

On Wednesday, April 14 Mark will be making a stop at The Fight Network for interviews, including a sit-down with TFN insider Robin Black. Later that same day, Mark will slide by the studios of Hard Drive for a chance to go one-on-one with underground media icon Gabriel Morency. That show will air live at 5 p.m. ET/3 p.m. MT/2 p.m. PT – catch it at www.ustream.tv/channel/morency-sports-tv.

To round out the trip it’s another busy day on Thursday, April 15 as Mark stops by the studios of Sportsnet to tape an “MMA Connected” interview with Canada’s top MMA journalist “Showdown” Joe Ferraro. Later in the day, Mark will also visit The Score for interviews with “The Fight Show” and “The MMA Show.”

For all the latest news surrounding the Maximum Fighting Championship, visit www.maximumfighting.com.