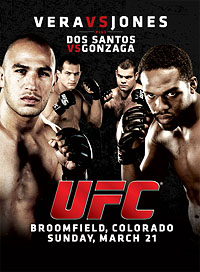 BROOMFIELD, Colo. – This Sunday night, March 21, the UFC will makes its network debut on the Versus cable channel with “UFC Live: Vera vs Jones”, live MMA action from the 1stBank Center in Broomfield, Colo.

Headlining the event will be a light heavyweight match-up between two of the most dynamic strikers in the sport; Jon “Bones” Jones (9-1) will pit his unorthodox striking and incredible athleticism against the experience, Muay Thai, and BJJ brown belt of Brandon “The Truth” Vera (11-4).

In the co-main event, two of the most dangerous heavyweights in the world will clash as Brazilian wrecking train Junior “Cigano” Dos Santos (10-1) goes up against former title contender, BJJ black belt, and hard-hitting Gabriel “Napao” Gonzaga (11-4). If Dos Santos can ruin Gonzaga’s night, the next stop on this wrecking train’s route to greatness will surely be a shot at the UFC title.

Also appearing on the main card broadcast is another heavyweight bout that should be very exciting for the fans. Seasoned veteran Paul “The Headunter” Buentello (25-11) will be looking to decapitate the very capable Cheick Kongo (24-6-1). With Kongo losing his last two bouts and Buentello also coming off a loss, these two strikers will be looking for the knockout.

ProMMAnow.com has collected the fight lines from three different popular sports-betting websites: Bodog.com, BetUS.com, and Bookmaker.com. Each site’s lines are very similar in their assessments. UFC.com only guarantees these three bouts will make the live broadcast, and all of the online sports books only have odds listed for these three fights,

Kongo is being looked at as the favorite. Although he’s lost his last two bouts they have been to top competitors, Frank Mir and Cain Velasquez. While there’s no shame in losing to either fighter, it does give us a clear indication that Kongo is not a top tier fighter. Can he reach that level? Time will tell, but my gut feeling says no.

Fortunately for Kongo, Buentello is not a top tier fighter either. Primarily, Buentello is a damn tough one dimensional boxer, with a few kicks thrown in for good measure. He does have a few submission wins, but most of those have come from strikes. If you can find a prop bet that this fight won’t go to the ground, that’s a bet you can put the house on.

Buentello is HARD to put away. In 38 fights, he’s only been stopped with strikes twice. He can be submitted, but not by Kongo. Kongo does have more tools to win this fight because his striking is much more diverse. He uses a lot more kicks than Buentello, and I think that will make the difference in the fight.

Kongo should win, having said that though, Buentello can turn just about anyone’s lights out, unless they’re an seven foot tall Stephan Struve. Buentello hit that dude with some big big shots, and Struve just kept coming back, and ultimately won the decision. I don’t think Kongo can stop Buentello, but I do see him out-pointing “The Headhunter”.

Buentello always has the chance to end the fight, and for that reason, as the underdog, a gambler could do worse things than bet on him against Kongo. Bodog is going to have the highest payout on this one, so that would be the way to go if you are going to risk it.

Both of these fighters have BIG BIG power. Scary power. This is one crazy fight. We have seen Gonzaga knock out the best strikers in the world and his strong point is really his grappling. We’ve also seen him cave in when he takes some big shots and falter in adversity.

Dos Santos lost his only fight from a submission back in 2007, but he has certainly improved since then. We don’t see him throw a lot of kicks, and Gonzaga has very dangerous kicks. If Gonzaga stands toe to toe and tries to box with Dos Santos, he’s going to get knocked out.

However, if Gonzaga can create some distance and use his kicks, and possibly even get the fight to the ground, that would be to his advantage. At this point in the game, I would not recommend betting against Dos Santos. I can’t think of another heavyweight in MMA who can match the speed and power of his boxing.

Training with the likes of Big Nog and Anderson Silva, Dos Santos should be able to stay out of danger from Gonzaga’s submission game. Gonzaga has a puncher and kicker’s chance to win, but I wouldn’t take that bet. I never advise betting on the favorites, however Dos Santos is on such a roll, and is so talented, and you just have so much money you don’t know what to do with, then why not lay 10K on Dos Santos, what the hell… Either Bookmaker or BetUS would be the way to go if you’re betting on Dos Santos.

I like Brandon Vera, but he’s not going to win this fight. Outside of a fluke accident, I just don’t see anyway for Vera to win. Vera said Jones is being touted as “the second coming of Jesus Christ.” There is a ton of hype around Jones, and many, including Vera, are comparing it to the hype that surrounded Vera a few years ago when he was storming through the heavyweight division.

However, Jones has something, in my opinion, that Vera never did, uncanny athleticism. The way Jones is built, his frame, the large “bones” with lethal weapons at the end of each limb is unusual. Vera was and is a great technical striker, but there is something crazy about Jones, a certain “X-factor” that sets him apart from 99% of the fighters. Maybe he is the second coming…

There is the possibility that Vera could submit Jones. Force can be used against itself, and Vera has made some statements that could lead one to believe he may start focusing more on his ground game.

Vera said it was almost like he forgot he was a BJJ brown belt under Master Lloyd Irvin. Vera has the ability to win. He has the tools, and the experience of being in the big fights, the main events, and that will help him, but it’s probably not going to be enough.

Bodog has Jones at -285. I never recommend betting on favorites, but if you have the money to lose (that’s the only time you should bet in my opinion) that would be the line to take.

It’s been said that Jones has nothing to lose in this fight. While not entirely true, I do understand the point.

He would lose an incredible amount of momentum. He lost his last bout against Mat Hamill due to disqualification, but he was dominating Hamill, and would have won that fight pretty easily.

If Vera lost this fight, I’m not sure where he would go from here. He is coming off a main event loss to Randy “The Natural” Couture. That was an enormous fight for him, and taking Couture the distance, “making him look up at the clock,” and really pushing Couture, lets Vera know exactly where he stands in the scheme of things.

Vera needs this win badly… but I still wouldn’t bet on him.