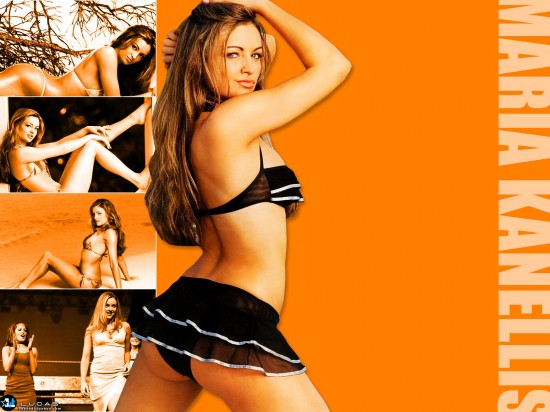 DALLAS (March 15, 2010) – Last week on HDNet’s Inside MMA, we broke the news that Maria Kanellis will become the newest member of the network’s MMA broadcast team. Kanellis was WWE’s 2009 “Diva of the Year,” a Playboy Cover Girl, recording artist and a contestant on this season’s “Celebrity Apprentice.” She will debut as the backstage correspondent on HDNet’s LIVE broadcast of “Mark Burnett Presents: King of the Cage: Legacy” on March 26 from the Silver Legacy Casino in Reno, Nev.

“Maria is an amazing talent with a devoted fan base and we are excited to have her as part of our MMA broadcast team,” said Andrew Simon, CEO of HDNet Fights. “Maria loves MMA and is a superstar on LIVE television – the MMA community will welcome the passion she will bring to covering the sport.”

“My mantra is ‘passion is my motivation’ and I am definitely passionate about MMA!” said Kanellis. “I am excited for the opportunity to be part of the HDNet family. I love their commitment to the sport.”
Kanellis began her career in 2004 as a WWE Diva and appeared on the cover of Playboy magazine in April 2008. Her television credits include appearances on “Family Feud,” “Project Runway,” ” VH1’s Top 20 Video Countdown,” “The Insider,” “Best Damn Sports Show Period,” “Red Eye” and “The Today Show.”

She will be featured as a contestant on this season’s “The Celebrity Apprentice” which premiered on March 14 on NBC. Her debut album “Seven Sins” will be available on iTunes on April 13 and a preview of the first single can be heard at http://mariakanellis.net.