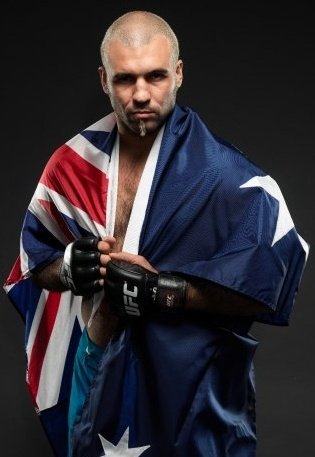 Old school UFC fans were excited when it was announced “The King of Rock n’ Rumble” Elvis Sinosic would be fighting at UFC 110 in Australia. Looking back on his time with the UFC takes fans back mentally to the “glory days” of the promotion, right after the Zuffa takeover, in that period leading up to the first season of The Ultimate Fighter. Of course there have been a few “glory days” of the promotion, but Sinosic was in there with Tito Ortiz, Jeremy Horn, Renato Sobral, and Evan Tanner. You get the picture… The guy is part of history.

Pro MMA Now (www.prommanow.com) originally spoke with Sinosic just a few days prior to UFC 110, and everything seemed great. The Aussie was excited to fight on the UFC’s very first card in Australia, he had trained hard, and was incredibly grateful for the opportunity. Then on Feb. 20, two days before he was to step in the Octagon against Chris Haseman in a rematch, the news came out that Sinosic was injured and forced to pull out of UFC 110.

Of course, the fans were disappointed at the news, but surely not nearly as disappointed as Sinosic himself, who had spent weeks and weeks preparing and training for the fight. Pro MMA Now (www.prommanow.com) spoke again with Sinosic on Monday, Feb. 22, to get the full story, see how he is feeling, see what he thought of his fellow coach, Anthony Perosh’s performance, and what he thought overall of the UFC’s first visit to the “land down under”.

Hi Elvis. You were all set to face Chris Haseman at UFC 110 in Sydney, Australia this past weekend. Apparently you were injured. Can you tell us exactly what happened, how it happened, and why you had to pull out?
I injured my shoulder severely on the weekend during my last sparring session. It was an aggravated injury. As with most fighters you get injuries. During the course of my training camp I received numerous injuries, my shoulder just being one of them. At the time it seemed like the least of my worries among them. In my last sparring session it just escalated to the point that it was too much. I just was not able to use my right shoulder/arm to it’s full ability. After this I went to see my doctor, got scans done, went and saw a specialist. Once I learnt of the extent of the damage I informed the UFC. They arranged their own doctor to look at it, organised for a cortisone shot. The cortisone shot did not help at all sadly. Even their doctor told me that he did not expect the short to help. But it was worth trying.

It turns out that I have a couple of underlying problems with my shoulder. Basically I have tendinitis, bone spurs which have lead to chronic Osteoathritis and on top of that Adhesive Capsulitis, known as “frozen shoulder”. There could also be further damage but I will need an MRI or key hole surgery to determine the full extent. I had a sore shoulder during my camp but never realized the extent of what was wrong. The six-week camp aggravated the injuries and it continued to escalate until the last week where it became unbearable. The specialist informed me that I had about 40-50% use of my right arm.

You must have been extremely disappointed. And I know your fans were disappointed they didn’t get to see you perform. Can you explain how you felt, and your reaction when you realized you would not be able to fight?
It was very emotional, I was very upset. I felt extremely disappointed and felt like I was letting a lot of people down. It was a very difficult decision to make. The thing is I can use my arm for normal day to day activities, but when I put it under any duress then the problems begin. So when I was training it escalated to the point that I was in constant pain to such an extent that I had difficulty sleeping.

How serious is the injury, is it a recurring injury, and do you think you will need surgery?
It appears that is an injury that has been with me for a while that has continued to worsen and was severally aggravated by the training camp. The next step is to follow up with my surgeon and look into my surgery options. Apparently, at least from the first consultation, it was quite extensive. I was informed that key hole surgery will alleviate a lot of my problems but not give me one-hundred percent use of the shoulder. Key hole surgery will also help determine the extent of any further damage. I will most likely need a complete shoulder reconstruction, if not now, at least down the track.

Your fellow coach and gym owner at Sinosic Perosh Martial Arts, Anthony Perosh, got to fight, and got himself a four fight deal for stepping up on two days notice to fight Cro Cop. That was pretty cool. What’s your feeling on that situation, and his fight with Cro Cop?
What can I say. He showed the heart of a warrior. He stepped in on two days notice. He moved up a weight class and took on a legend in the sport. He stepped up when others wouldn’t. Apparently quite a few other fighters who were there turned down the offer. It was a great opportunity. It got him into the show and back into the UFC. He faced the challenge and did not back down. I’m sure he picked up a lot of new fans and you’ll be seeing him again. Next time though you’ll see him in his weight class and with notice before he fights. I can’t wait.

Did you get to sit in the audience and watch UFC 110? If so, what was your overall opinion?
I did get to watch UFC 110. If not all of it, at least a fair amount of the show. It was a great show. What was amazing was the Australian audience. The place went OFF! The atmosphere was amazing the place was pumping. Something that was different to other UFC’s I’ve attended was that the place was full and pumping from the first prelim. The other great thing was how educated the fans were. I’ve been to shows where you get boo’s once it hits the ground. The Aussie crowd was cheering when fighters passed guard or established mount. How cool is that. It just shows that with education the fans truly begin to appreciate our sport. After the success of that show the UFC needs to come back soon, I’d be surprised if they waited til next year, that’s how good it was.

Where do you go from here Elvis – are we going to have to wait until the UFC comes back to Australia to see you in the Octagon?
For me it’s back to the daily grind. The next step is to see my specialist and discuss my surgery. I also have some time off which I am looking forward to. This time I’ll get to travel a bit and not have to worry about making weight and pushing my body to its limits. I’m looking forward to lying back on a beach and soaking up some rays.

Thank you my friend!! Hope you feel better.

Be sure to check out our pre-UFC 110 interview with “The King of Rock n’ Rumble” Elvis Sinosic.

5 thoughts on “Exclusive: Elvis Sinosic explains injury that took him out of UFC 110”