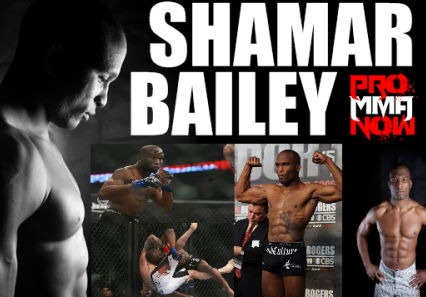 It was announced last week that Shamar Bailey (10-1) will fight Justin Wilcox (8-3) at Strikeforce Challengers on March 27. The bout, which will take place at the Save Mart Center in Fresno, Calif., will be one of five fights to air live on Showtime. Bailey, who is on a four fight win streak, is coming off a unanimous decision victory over John Kolosci (13-6) at “Strikeforce: Fedor vs. Rogers” this past November. Pro MMA Now (www.prommanow.com) caught up with Shamar this week to talk about the upcoming fight with Wilcox, find out why it is at a catch weight, and get his opinion on his opponent’s nickname.

Hi Shamar. Thank you for speaking with us today at Pro MMA Now (www.prommanow.com). How have you been, and what have you been up to since you defeated John Kolosci in Strikeforce this past November?

Hi Jack, thanks for having me. I’ve been good. Been training hard and working with my boys on the Indianapolis Fire Department fighting some pretty decent fires and coaching High School wrestling. Just keeping busy and focused on my next fight.

That whole “Strikeforce: Fedor vs. Rogers” event was amazing. How did it feel to get your first Strikeforce win under your belt, and to be part of such a big card?

The Fedor vs. Rodgers card was awesome and it just goes to show you how far our sport has come in the eyes of the public. The venue was packed and it was nice to see that you didn’t need to have that “UFC” brand in order to pack the seats in 15,000 strong. I tried to just stay focused on my fight and what I was there to do and not get caught up in the superstars I was fighting alongside of. It was definitely a privilege to be able to sit and watch the main card fights after I was done with mine.

So, we got the word last week you will be fighting Justin Wilcox at the next Strikeforce Challengers show on March 26. Does it bother you at all that your last fight was on their big show, and now you are on the Challengers show – does that matter at all to you, or are you just glad to fight wherever they put you?

It doesn’t bother me at all. I wasn’t on the televised portion of the card in my debut fight even though it was a high profile card. I want to perform on televised cards as much as possible because people have been wanting to see me in action for a long time and the Challengers Series is the road that Strikeforce has laid out for us “top prospects” to shine on, so I’m all about paying my dues and earning a spot on one of their prime time shows. It will be that much more worth it when it happens.

Yep, that makes sense. You are replacing Bryan Travers who had to withdraw due to an injury. Were you already in training when they offered you this fight, and how does Wilcox compare to other competition you have fought?

When I got the call to fight Justin Wilcox I was already in training for a hopeful fight in April at 170. So I was training but not quite in fight mode. But fighting is a lifestyle and I live it to the fullest so I just had to switch gears a little bit and Ill be ready for this fight for sure. Wilcox is probably the toughest wrestler that I’ve fought against to date, but I won’t know for sure how he compares to other opponents I’ve faced til the fight is over, you know? I don’t think he poses any special problems to me that exceed any of my other opponents, but I’m ready to do my thing and not his.

Can you ask Wilcox why he stole Seth Petruzelli’s nickname? I mean, is MMA really big enough for two “Silverbacks”? I’m really don’t think it is. Now, Seth told us he got his nickname because The Silverback actually has the smallest penis-to-body ratio in the animal kingodm. It’s true – he said that https://prommanow.com/index.php/2008/09/26/seth-petruzelli-return-of-the-silverback-pro-mma-exclusive-interview/. I just wonder why Wilcox calls himself “The Silverback”?

(laughs) Wow! Ummmmm… that’s a very good question. Sounds like Wilcox should have researched his nickname as hard as Petruzelli did huh? Whatever works for him I guess.

Have you seen any of Wilcox’s fights? From what you know, how do you think you match up with him? He seems like a grinder.

I have seen a few of his fights. I’ve noticed that it seems his time at AKA has helped improve with each fight. He does seem like a grinder… and I’m not gonna have that happen to me, so I hope he has a different game plan than the one he used for his last eight fights that he has won.

Speaking of “grinders”, they don’t always have the most exciting styles. When you fight, how much emphasis do you put on entertaining the fans and making the fight exciting, or are you only interested in winning, no matter what it takes or how it may look?

Very good question. I am disgusted with myself if I don’t entertain the fans. I am too athletic, strong, and fast (thanks to God for that) to spend the whole fight in a clinch or in someone’s guard with my head laying on his stomach. Styles do make fights and every now and then you’ll meet someone that just wants to wrap you up and hold you tight so you don’t kill them. I’d rather be dropping blows from top or choking you out and that’s what I train for. Non stop action. Now, the rule of no elbows to the head of a grounded opponent kind of messed me up my ground and pound attack last fight, but I’m definitely ready to inflict damage regardless now. We are entertainers and that’s what we get paid to do. And you can do that intelligently, and do everything you can to be sure your hand is raised when its all over.

Now, you normally fight at welterweight right? And I guess Wilcox is primarily a lightweight. But this fight is going to be at a catch weight of 160 pounds, right? Could they not find any lightweights to fight him? What’s the purpose in taking you to welterweight, and having you come down to fight this guy? Does the catch weight thing bother you at all, or makes no difference?

Yeah, all my fights have been at 170 lbs., but I got the call and I was in. I was weighing 190 at the time. Now I’m dieting down to a weight that will make the cut more comfortable, doin’ it the right way. I live my life to be ready for opportunity and I don’t question the manner in which it shows up at my doorstep as long as it makes sense to say yes. Plus, I’ve considered fighting at both 155 and 170, and this a great chance to see how I’ll feel at a lower weight. I was hoping to fight Wilcox at 165 but it’s smart on his part to say 160. And I accepted. So here we go. If anything, cutting this much weight just makes me more pissed off come fight time.

That’s a good way to look at it. How did you get involved with MMA Shamar, and where do you currently train?

I got involved in MMA by simply walking into a gym that happened to be where Chris Lytle and Jake O’Brien, among others trained. At the time, Lytle was the only well known fighter. I was just trying to stay in shape since my college wrestling career was over. But one thing led to another and I had my first fight and I was hooked. I’m used to being involved in things that require you to be set apart from the majority of society in order to accomplish what’s yours, and it’s no different in MMA. I have aspirations in this sport and in Strikeforce, and I’m loving the privilege that God has given me to compete at this level in this sport.

Thank you for taking the time to speak with us at Pro MMA Now (www.prommanow.com). We wish you the best of luck in your upcoming fight. Is there anyone you want to thank or do you want to send any shout outs?

I would like to thank God first and foremost for blessing me with the abilities that I currently have in this sport. Thank my trainers and teammates for helping me train for this fight and every fight. My management for staying busy enough to get me this fight. My sponsors and chiropractor. And all my family, friends, and true fans that help add to my motivation to keep on pushing.