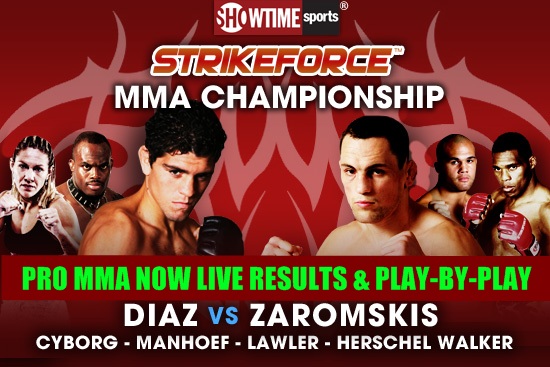 SUNRISE, Fla. – Pro MMA Now (www.prommanow.com) will be cage side tonight at the BankAtlantic Center in Sunrise, Fla. for “Strikeforce: Miami”. We will be providing live round-by-round updates and results of all the action starting at approximately 7:30 p.m. ET for the preliminary card, moving on into the Showtime televised main card beginning at 10:00 p.m. ET.

In the main event, Strikeforce’s vacant welterweight title is on the line as Nick Diaz tries to prove he is the promotion’s top 170-pounder by stopping Marius Zaromskis. In a women’s 145-pound title fight, Cris Santos will look to defend her title against Golden Glory’s Marloes Coenen, Bobby Lashley will take on Wes Sims, football legend Herschel Walker makes his pro debut against Greg Nagy, and Joe Riggs will battle Robbie Lawler, to round out the televised card.

Round 1 –  No touching of gloves and still no action in the round.  Each waiting for the other to make their move.  Keenan throwing out jabs to test the waters.  Heavy flurry thrown by Hassan followed by no action.  The two fighters dancing around with no action.  Hassan looks to be head hunting with his eyes only.  Three left hooks by Hassan drops Keenan.  Hassan drops punches in Keenan’s guard.  Hassan stands up in the middle of the ring waiting for Keenan for the last 18 seconds.

Round 2 –  Slow start again.  Keenan throwing more punches but none have landed.  Hassan throws another flurry ended by a nice right hook that connects.  Keenan trying to connect with some inside leg kicks.  Hassan drops Keenan with a powerful left hook. KO.

OFFICIAL RESULT: Hassan winner by KO 2:42 of the second round.

Round 1 -Both fighters pummeling for position.  Ray against the cage and effectively defends takedowns while Clarke throws knees to his body and legs.  The ref breaks them up  Ray ends up taking down into Clarkes full mount followed by heavy ground and pound and ref stoppage.

Round 1 -Gomez aggressively takes down Oxley and ends up in a Gulliotine.  He quickly slips out and ends up in side control.  He then attempts a knee bar.  Oxley follows up with his own knee bar attempt.  Gomez get back into Oxley’s guard throwing punches.

Round 2 -Gomez takes down Oxley. struggle for another knee bar on both sides.  Gomez back to Oxley’s open guard.  The crowd cheers for the ref to stand them up and he does in the last seconds.  Oxley throws a head kick and looks like he injured his leg doing so.

Round 3 -Gomez takes Oxley down again.  Gomez goes for another knee bar Oxley answers.  Gomez back to Oxley’s guard.

Round 1 -Homasi attempting and taking down Kelly once.  Kelly defended the takedown and rained down a barrage of punches completely undefended by Homasi.  Homasi took more punishment from punches when he was taken down and Kelly took the mount.

Round 2 -Submission win by Kelly via a rear naked choke.

Round 1 –  Pablo aggressive with his flurries landing a few.  Pablo defends takedown.  Pablo grabs for the gulliotin when Marcos goes for the takedown.  Pablo switches his hips and submits Marcos with an arm bar.

Round 2 -Most of the round on the ground with Hieron trying to land punches and pass Riggs guard.

Round 3 – Riggs knee into Hierons takedown. Hieron throws punches from Riggs guard and opens up a cut on Riggs forehead.  Hieron trys to land more while in Riggs guard. Ref stands them up. Hieron catches Riggs with a straight left.  Riggs fall hard and gets Hieron into his guard.  Hieron trys to catch Riggs again while in his guard. Ref stands them up. Fight ends in an embrace.

Round 1 – I give this one less than a minute. Wes dancing around before the bell sounds. He’s acting goofy. Wes looks so out of shape. He has a big belly. He is very tall. Lashley starts out trying to swing. Then he takes Sims down. Sims has guard. Lashley is in Wes’s guard now and Wes is holding on tight. Lashley looking for some ground and pound, lands a few big shots. Sims kicks out, gives up his back. Lashley starts pounding, and the ref steps in and stops it. Sims isn’t happy about the stoppage and maybe it was a bit early but he went flat after giving up his  back and was not defending. Lashley’s transitions on the ground reminded me of a pro wrestling style of movement. It was odd really.

Round 1 – This should be one hell of a fight. Someone could get hurt in this damn thing. Lawler said he intends to stand with him. Lawler’s hands a little lower than Manhoef’s. Kick by Manhoef is blocked. Lawler through a jumping round house that missed. Manhoef taking his time measuring, waiting. Head kick by Lawler blocked. short exchange. Leg kick Lawler. Inside leg kick Manhoef. Lawler circling to the left and is tagged with a right. Body kick by Manhoef. Manhoef with a big inside leg kick. Lawler is hesitating and is eating big strikes. Manhoef exploding and Lawler not fighting back. Another inside leg kick by Lawler. Lawler not firing back. Huge right hand by Lawler and Manhoef is down, one more big left and Manhoef is out cold. One of the BEST KO’S I HAVE EVER SEEN. Lawler is limping from those enormous leg kicks. What a fucking display of power!! Manhoef was picking him apart and then ba booom!!

Round 1 –  Walker’s complete purse is being donated to charity. That is very cool, and proves he’s doing this for the love of competition. Walker is ripped. Nagy wouldn’t look in his eyes. Nagy eats a punch and is dancing around with a very ugly style. Walker lands a leg kick, and another. Walker with another leg kick. Nagy shoots and Walker stuffs it. Nagy is bleeding. Walker on top of Nagy on the ground. Walker gets full mount and is laying on the ground and pound. Nagy looking for submissions but Walker still in control with knee on belly. Nagy goes for a heel hook but Walker escapes it. Walker in north/south position, moves to side control. Walker still in full control. Walker traps Nagy’s arm with his knee and lays on some punches. Pro MMA Now scores the round 10-9 for Walker.

Round 2 – Leg kick by Walker. Another leg kick by Walker. Walker gets a takedown with side control. Walker gets full mount from the back. Nagy rolls over and Walker has full mount. Nagy goes out the back door, but Walker still has control as Nagy gets on his feet. Walker lands a knee as the crowd tells him what to do. Walker hanging on with a body lock, has side control, now has the back of Nagy. Walker has him flattened out. Nagy is doing NOTHING at this point. Walker holds one hand and punches with the other. Pro MMA Now scores the round 10-9 for Walker.

Round 3 – After two full rounds Walker is not even breathing hard, and he has been working hard. Nagy comes out swinging. Walker clinches him up and falls into guard as Walker takes him down. Nagy goes for an armbar but Walker escapes. Walker has full mount and Nagy is trying to lock Walker up with his legs for a submission. Walker pounding from mount. Nagy warned that the fight is going to be stopped. The ref stops it after quantity of pounding.

Round 1 – Here we go folks. Hold on to your hats. Coenen wasnts to knock her out. Straight kick by Coenen. Cyborg clinches up, throws a couple punches but is too close. Coenen has underhooks. coenen misses with a big punch. Cyborg gets a body lock and a takedown. Coenen has full guard. Cyborg with a big right to the face as she postures up and now back in closed guard. Cyborg dropping bombs when she postures up. Back in guard, she postures up and drops Coenen on her head as she hangs on. Cyborg dives in with a big punch. Coenen holding on. Up kick by Coenen lands. Cyborg lets her up. Cyborg’s hands are pretty low. Left punch by Cyborg. They exchange some shots. cyborg with inside leg kick. Coenen swings a few and grabs underhooks, presses Cyborg against the cage. Coenen with foot stomps. Cyborg turns her around to the cage. Elbow by Coenen that misses. Cyborg starts firing off shots. Coenen lands a leg kick inside. Huge right hand by Coenen misses. Spinning back kick by Cyborg catches Coenen in the gut. Pro MMA Now scores it 10-9 Cyborg.

Round 2 – Coenen did very well for herself in that first round. She didn’t win but she didn’t die. Coenen lands a couple of punches. But gets put to the ground she upkicks Cyborg. Cyborg picks her up and throws her back across the cage. Cyborg gets side control, Coenen gets closed full guard. Cyborg pushes Coenen up against the cage wall as she postures up. Cyborg lets her up. Leg kick by Cyborg. Left hook misses by Coenen. Cyborg lands a couple nice punches. Body kick by Cyborg. Coenen has some nice punches. Cyborg lands a couple shots that rock Coenen’s head. Cyborg stuffs a takedown attempt and Coenen jumps guard. Cyborg stands up and dives in with a big punch. She postures up and lands some punches. Coenen still on her back. Cyborg dives in again with a big punch after a couple of kicks to the downed Coenen. Cyborg postures up with more shots.  Pro MMA Now scores it 10-9 Cyborg.

Round 3 – This really is a fun fight and very competitive. Coenen has power in her punches, no doubt. She could hurt Cyborg if she connects solid. Leg kick by Coenen. She shoots and drives her against the cage. They’re tied up, Cyborg backs up and lands some punches and kicks. Coenen shoots, Cyborg stops her and puts her on her back quickly. Big body shots by Cyborg, loud and powerful. People were questioning Cyborg’s cardio but so far so good. Both gals are top notch fighters. I would like to see Coenen vs. Gina some day if Cyborg wins this. Cyborg postures up lands big shots. Big right hand by Coenen. Right hand by Cyborg. Coenen shoots, gets stuffed and is eating big shots. Cyborg trying to finish. The ref stops it after punches in bunches. Seems like they stopped it a little early. Cyborg was punching but Coenen was blocking them at the end.

Round 1 –  Diaz has a big reach advantage, five inches. This should be interesting because Diaz is not a dancer. He will stand right there. They are touching heads, but no gloves. Zaromskis tags Diaz with a shot or two. Diaz rocks Zaromskis with some punches. Diaz’s straight punches were beating his hooks. Zaromskis lands a straight kick that double’s him over and Diaz grabs a single leg and starts punishing it with knees and knees over and over. Diaz has landed about twenty knees to Zaromski’s right leg. Zaromskis can’t even move. Diazalmost gets him down. Diaz punishing him with boxing. Knee by Zaromskis and then a punch that drops him. Diaz turtles up. Zaromski’s is warned for back of the head. They are trading punches again. Both guys eating big shots but Diaz landing more shots because of the reach. Diaz landing punches in bunches, body shot by Diaz. Zaromskis trying to move back for the leg kick but Diaz is punishing  him. Huge body shot by Diaz. Over and over, Diaz’s boxing looking amazing he is tearing this dude apart. Pro boxing skills finally drops Zaromskis to the canvas, KO, it is over.