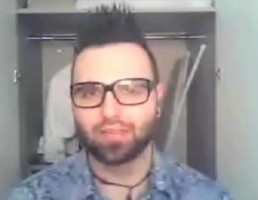 PRO MMA:  Today we are speaking with one one of the most familiar voices to fans of modern day Mixed Martial Arts. His name is Jordan Breen and he’s known throughout the MMA world for his Radio Show on the Sherdog Radio Network. How’s it going Jordan? What have you been up to today and take us through a typical day in the life of Jordan Breen. If we were Siamese Twins for a day what would I be in for in a twenty-four hour period?
JB: My days are pretty regular, especially in the summer. I’m eager to get away from school, so I embrace work a bit more intently. I got up, wrote a news blurb, did radio, wrote another news piece, made some phone calls, went out for Korean food with the girlfriend, came home, and answered around three dozen emails amidst sound and fury from the raucous neighbors. And yes, I’m fully aware of how truly thrilling that sounds. I’ll pretend you caught me on a boring day, but things don’t really get too much more exciting.

PRO MMA:  How old are you Jordan and where were you born? Where did you grow up and where do you live now?
JB: I turned 21 this past June. Born and raised in Halifax, Nova Scotia, Canada, but I split some time seasonally in Colorado, where my girlfriend studies. I’m one of the few Sherdog employees fortunate enough not to be stuck in California, thankfully.

PRO MMA:  How old were you when you first got interested in martial arts and have you had any training in martial arts?
JB: I was never a major martial arts kid growing up. I grew up a major pro-wrestling fan and with that, I eventually got into wrestling competitively through school. Because of being a pro-wrestling fan, I was always aware of the sport, but having seen some of the very early UFCs, I never was super interested. Then, just by chance, around ’99, I caught some of the then-recent UFCs and was a lot more impressed. Through newsgroups and the like, I started finding highlights, fights and events. From that point on, it’s been full speed ahead, and as I got more into MMA, I got into the gym for some muay thai and BJJ, mostly no-gi action.

PRO MMA:  How did this whole MMA Radio thing come about for you? How did you get into it and how satisfying is it for you?
JB: I started working for Sherdog in June 2006, working largely as a news writer with the occasional feature. Because of the fact I was particularly familiar with the Japanese MMA world and had some contacts abroad, I ended up doing the Japanese MMA notebook articles for the site. In the months following, I appeared on Beatdown a couple times to discuss some higher-profile Japanese MMA stories and events, and for whatever reason, people were interested with what I had to say and wanted to hear more of me on radio. Later in 2007, when Sherdog switched over to live radio and we increased our programming, TJ DeSantis asked me if I’d be interested in doing a show that would cater more to the devout diehard fans of the sport, and it was an offer I certainly couldn’t pass up.

PRO MMA:  If you weren’t doing radio what would you be doing?
JB: Well, I’m a full-time student anyhow, going into my last year on BA, majoring in Honors Sociology. So I guess I’d pay a bit more attention to academia, and get some lame job in retail so I wouldn’t starve.

PRO MMA:  Could you give us a list of all the jobs you have ever worked?
JB: In high school and early in university, I did work setting up and tearing down concerts, events and the like, on the grunt labor tip. I’m far, far happier lining my wallet through MMA than trusses and cables.

PRO MMA:  If I’m not mistaken I’ve heard you say that you do play video games. Which do you prefer more and which do you own: Wii, Playstation 3, or XBOX 360? What games are you playing right now and what are some of your favorites?
JB: Doesn’t everyone play video games? I mostly play a lot of Wii, since I got my girl one a while back. Really though, for the last ten years, I’ve been replaying old games I grew up with. Stuff on the NES, SNES, Genesis… it’s sort of my nostalgic indulgence, to relive my childhood. I’ve probably beat Contra, the Castlevania games, the early portions of the Final Fantasy series and so on into infinity. I am on the verge of buying another console though, so I can get into more contemporary gaming.

PRO MMA:  What are some of your other interests outside of MMA and gaming?
JB: I wouldn’t really call gaming a major interest. And I think naming interests makes me sound pretty boring. I’m a big sports fan, not just MMA. I’ll watch pretty much any sport. Academia and literature obviously play a major role in my life. Like the majority of the human population, I dig film and music. Science, politics. I try to be renaissance, but if nothing else, I’m just thankful that I don’t have to be one of those people who list dirtbiking or hunting as a major hobby.

PRO MMA:  Out of all the professional fighters you have met who was the funniest? Who was the rudest?
JB: Funniest is hard. Off the top of my head, maybe Wes Sims and Rory Markham, for opposite reasons. Rudest, everyone wants to hear some major league fighter is a total dick. And to be fair, there are a handful. However, on the most basic personal levels, the rudest fighters you meet in the fight game are local Billy Badasses on small shows who bought a pair of Tapouts and is ready to start “ultimate fighting”. Every time, without fail.

PRO MMA:  What is the most memorable live MMA event you ever attended?
JB: I think for anyone, your first live event tends to be something special, so for me, UCC 10 in Hull, Quebec. It was great enough as an experience on its own, having been a fan for a few years and finally getting to see a live event, but I remember it even more fondly as time has gone on since there was a lot of guys just stepping out in the game at that point. Guys on that card like Georges St. Pierre, Rich Franklin, Jeff Curran, Ivan Menjivar and Drew McFedries have all since made names for themselves, and watching them become known commodities in the game has been all the more fun because of it.

PRO MMA:  Out of all the fights and events you’ve been to in your career what is the strangest incident you have ever witnessed?
JB: The strangest, or maybe just most ridiculous thing I’ve ever seen at an event wasn’t even actually at an MMA event. I was at a beyond low budget kickboxing event once about three years ago, and was hanging out in one of the locker rooms before the bout got started. There was a guy trying to get psyched up for his fight, shadowboxing like a maniac, punching himself in the face, and just generally acting like a spaz. About five minutes before the guy is set to fight, he throws a massive roundhouse kick at the air, slipped off his plant foot, fell backwards, and hit his head on a bench, and knocked himself out. The guy was completely melted. It was so ridiculous to watch happen that I couldn’t even laugh.

PRO MMA:  Have you ever heard Dan Quinn’s (former football player for Notre Dame turned MMA fighter) theory about Stevia and cold fission? If so, what are your thoughts concerning the man and his ideas?
JB: I think Dan Quinn is a better promoter than a lot of the guys in MMA who are actually running shows. That said, Stevia being the key to global energy crises and various other predicaments? Come on now. If creating froth was all it took to save the world, I think coke and mentos would already be on the forefront.

PRO MMA:  Is time travel possible and will it ever be commonplace in society?
JB: I don’t think so. Even if there are alternate dimensions somewhere out there, I don’t think we have the ability to just jump back on the timeline and change actualized history. That said, if there is some potential for time travel, I’d love to hit that up. I’d love to go scrap in the Peloponnesian War, or even just take my laptop back in time and make them think I was a supernatural ruler.

PRO MMA:  Do you believe in Aliens? If so, to what extent?
JB: I want to believe. I’m never going to believe in something like that without some kind of tangible proof, but I like the idea in itself. The universe is so vast, intricate… it seems awfully wasteful to just have us around here.

PRO MMA:  What can we expect out of Jordan Breen in the next 5-10 years? What can we expect out of Sherdog.com in the next 5 years?
JB: That’s seriously impossible to answer. Nevermind a decade; five years ago, I was going into my junior year of high school and found it hard to imagine MMA would ever seriously blow up, let alone that I’d be covering the sport. Five years ago, Sherdog.com still had that horrendous red and white design, and now it’s the biggest MMA site in the world and we’re linked up with ESPN. I don’t know that the next five years can provide that dramatic of a change, but it’s still too long, and potentially wild to think about.

PRO MMA:  Is there anything else our readers should know about Jordan Breen; any closing thoughts or words of wisdom you can leave us with?
JB: The new Harvey Milk album is superb, and you should all buy it.

PRO MMA: Thanks so much for taking the time to speak with me and answer our questions. There’s only a handful of you guys who do what you do and even fewer who are good at it and you’re definitely one of the top MMA radio hosts out there. I really mean that. So keep up the good work and we look forward to your upcoming radio shows and we’ll talk to you soon I hope. Thanks alot.