It has been a long time since Mann Talk broke down a card, but as always the column hopes to preview each and every card. It probably will not happen, but we can all hope. Bellator 71 features the first round of the “Summer Series” light heavyweight tournament and the Bellator debut of former Kimbo Slice antagonist Brett Rogers.

Boom . Pow . Punch Kick Wow! Super Fight League 3 is back on May 6th live from New Delhi and once again fans from all over the world will be able to tune in.

The Super Fight League promotion has announced the main event for their third fight card which will be a heavyweight clash between former WWE wrestler Bobby Lashley and MMA vet James Thompson. 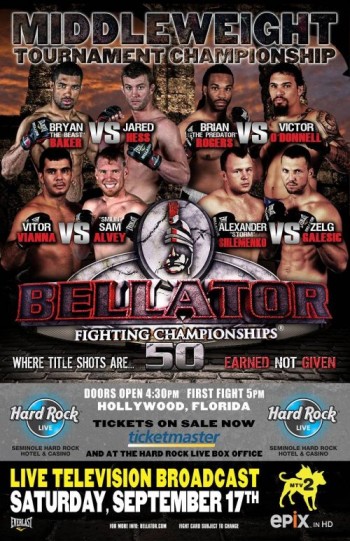 It was a night of big finishes at Bellator 50 as the beginning of the Season 5 Bellator Middleweight Tournament boasted three finishes out of the four quarterfinal matches.

Bellator 50 goes down this weekend. Even though there is also a UFC card going on, don’t forget to tune into MTV2 to check out the beginning on the next middleweight tournament.

If you missed the fight between Japanese demigod Kazushi Sakuraba and Zelg Galesic at DREAM.12’s “Cage of the Rising Sun” event on Sunday, you are in luck because we have the video for you right here. Although a relatively short fight, it was the most exciting fight of the night. Sakuraba shoots in for a … Read more

Souza is expected to fulfill the first fight on his contract in the fall.

“I am very excited that I will have the opportunity to fight in STRIKEFORCE amongst many of the world’s best middleweight fighters,” said the 29-year-old Souza, a native of Brazil, who established his position as a top tier middleweight last year after placing second in the 2008 Dream Middleweight Grand Prix single elimination tournament in Japan.