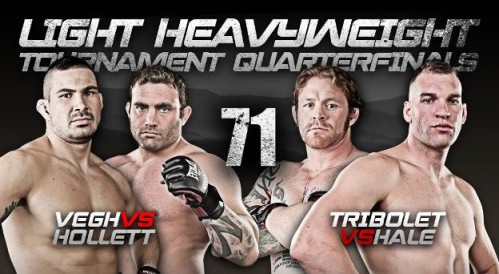 It has been a long time since Mann Talk broke down a card, but as always the column hopes to preview each and every card. It probably will not happen, but we can all hope. Bellator 71 features the first round of the “Summer Series” light heavyweight tournament and the Bellator debut of former Kimbo Slice antagonist Brett Rogers.

Travis Wiuff vs. Chris Davis
It was only a matter of time until it actually happened. Last year, a Bellator champion finally fell in one of the promotion’s notorious non-title bouts. Surprise light heavyweight champion Christian M’Pumbu, a guy who failed to win a DEEP tournament in 2010, could not handle the salty wrestling game on Travis Wiuff. Instead of a nice shiny belt, Wiuff earned a shot in this tournament.

Chris Davis seemed well on his way to a similar victory over M’Pumbu, but the eventual champion rocked him late in the third round and finished the fight. Davis might have success in this fight if he can stay off of his back. However, even if he wins the first round, his cardio will have a hard time not letting him down. Look for Wiuff to do enough to take two of three rounds on the cards.

Zelg Galesic vs. Attila Vegh
As you might expect from a Croatian fighter, striking has never really been a problem for Zelg Galesic. He can seriously crack on the feet with a variety of different strikes. In his last fight, he devastated former WEC champion Doug Marshall with knees to the body and then a flying knee to the dome. With that being said, the submission game has always been a weakness. To summarize his grappling game, he has been submitted by two extremely disappointing Japanese fighters; Makoto Takimoto and the zombified corpse of Kazushi Sakuraba.

Vegh is a serviceable striker and has built his record with a few knockouts. However, he seems to sit back and eat a lot of kicks to the legs and body, which really does not portend a good outcome here. On the ground, he can pull off a submission. Then again, a lot of Eastern European fighters pull off submissions on the regional circuit. Look for this fight to stay on the feet. Galesic will eventually catch Vegh, finish the fight and mostly snuff out the Slovak as a prospect.

Richard Hale vs. Beau Tribolet
Last year, Richard Hale showed the kind of size and athleticism that would almost certainly lead him to perennial title contention in the heavyweight division. The only problem is that he cuts down to light heavyweight. With that being said, he should be able to win here. Tribolet has picked up back-to-back victories over guys some fans might have heard of — UFC veteran Chase Gormley and “dude who recently lost to Tim Sylvia” Vince Lucero. However, if Hale can keep his breath, he should be able to take this decision by using his reach and staying on the outside.

Roy Boughton vs. Emanuel Newton
Back in 2008, Emanuel Newton looked like he was only a few wins away from a UFC contract. However, he lost three-straight fights and didn’t look like a guy with his head on straight. However, he has since won five-straight fights and looked the part of quality prospect again. Newton has not faced the best competition recently, but it is probably still better than the guys Boughton has beaten. His biggest win is a decision over shop-worn Murilo Rua. Look for Newton to own the clinch and score with knees and elbows en route to a commanding decision.

Brett Rogers vs. Kevin Asplund
You had to buy into Brett Rogers potential as a next-level prospect in order to get excited for his redemption tour. The MMA world already knew that Andrei Arlovksi has a weak chin and runs backwards in a straight line when he is in trouble. However, Rogers is a big athletic guy, which is normally more than enough in the heavyweight division. Some of his recent performances, see Ruben Villareal and Eddie Sanchez fights, have been absolutely dreadful.

Asplund has not faced the best competition, but he also has not lost since 2002. Rogers deserves to be a favorite here. His knees in the clinch should be enough to perhaps get a late stoppage. If he can’t win this type of fight, he does not deserve a place in the next heavyweight tournament.