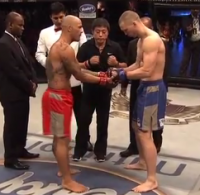 When the Super Fight League promoters unleashed Zelg Galesic (10-6) into their ‘O’Zone cage Sunday at Super Fight League 3 in India, I wonder what they were expecting. The Croatian middleweight was matched up against former WEC light heavyweight champion Doug “Rhino” Marshall (14-6) and the two opened up the show for the New Delhi MMA fans. Marshall looked slim and in great shape at 185 pounds, and on paper it looked to be a very competitive bout. But what actually happened was anything but close. In fact, it was something one might expect to see if you didn’t feed a Pitbull for a week and then threw a 20 ounce raw ribeye into the cage with him. See for yourself.