Brock Lesnar gave a controversial interview last night on Monday Night Raw talking about his time with the UFC, explaining why he returned to the WWE and why he wants to put the smackdown on John Cena. 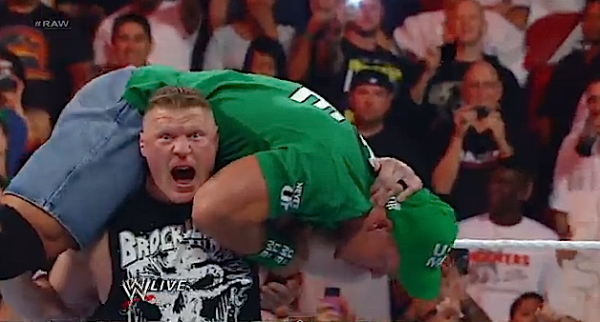 For the second week in a row former UFC heavyweight champion Brock Lesnar appeared on WWE’s Monday Night Raw. Watch as a slap from John Cena sets off a locker room clearing brawl.

Former UFC heavyweight champion Brock Lesnar has taken off his UFC gloves, dusted off his wrestling boots and returned to the world of professional wrestling, where the punches don’t hurt nearly as bad and the outcomes are scripted.

Lesnar, who will appear in the WWE ’12 video game due for release Nov. 22, says he would like one more match in the WWE under the right circumstances.

Former WWE superstar Dave Batista was on the verge of making his professional mixed martial arts debut in Strikeforce, the world’s second largest MMA promotion, until they were purchased by Zuffa.

In a rather bizarre occurrence following Brock Lesnar’s first round TKO loss to Cain Velasquez at UFC 121 Saturday night in Anaheim, WWE superstar “The Undertaker” confronts the former champ.

PRO MMA (promma.info) has learned from sources close to the Lion’s Den that former WWE superstar, Bobby Lashley (1-0) will fight another former WWE wrestler, Ken Shamrock (27-13-2) on March 21st at the Civic Center in Pensacola, FL. The bout is part of a combination MMA and Boxing card promoted by Roy Jones Jr. called “March Badness” that will be shown live on Pay-Per-View.

Both fighters were very successful in the world of pro wrestling during thier respective times, Shamrock from 1997-99 and Lashley 2005-08. Shamrock is a legend in MMA, being one of the first real stars of the sport and one of its earliest successful competitors. He competed in the very first UFC beating Pat Smith by heel hook before losing to eventual winner Royce Gracie in his second fight.

Former WWE pro wrestling star, Bobby Lashley, will reportedly have his next fight with the Palace Fighting Championship promotion. Lashley, 1-0 in his mixed martial arts career, will fight on the PFC’s February 6th card in Lenore, California.

Although an opponent has not been named, a list of fighters Lashley could face to possibly build up his fight resume has been sent to him for review.

Lashley attended Missouri Valley College, where he won three national amateur wrestling championships between 1996 and 1998 and placed fourth in 1995. Throughout 1997 and 1998, he was the National Association of Inter-collegiate Athletics (NAIA) National Wrestling Champion. Lashley later joined the United States Army, where he continued to wrestle.