A police manhunt is underway in Phuket, Thailand for TUF 8 veteran Junie Browning for his involvement in a barroom brawl that continued in a local hospital’s emergency ward late Monday night.

It seems just like yesterday “The Filipino Assassin” was sticking needles in his ear to show us the proper way to drain cauliflower ear. But this time the 27-year-old Brooklynite is working on his elbow. 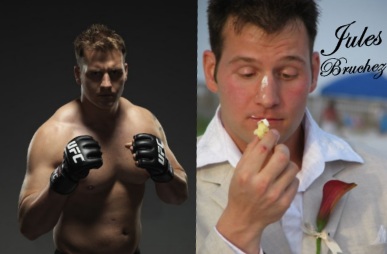 Jules Bruchez was part of Team Nogueira on season eight of The Ultimate Fighter. He went on to make his UFC debut in the TUF 8 Finale, but since then we have not heard much about Jules Bruchez… until now.

Get your grappling fix with this 2009 Grapplers Quest World Series of Grappling heavyweight battle between TUF 8 finalist Vinny Magalhaes and James Puopolo from Megaton. The match took place on Dec. 12, 2009 in Las Vegas, Nev. (View the ladies match after the jump)

TUF 8 finalist Phillipe Nover, in addition to his job as a UFC fighter, is also a nurse. In this video he shows the proper way to drain your own cauliflower ear. Are we ever going to see Nover back in the Octagon? He’s only fought once since losing to Efrain Escudero in the TUF … Read more

Primm in only his fourth pro fight and his first bout at middleweight took out the much more experienced Dolce with a first round TKO. PRO MMA(promma.info) spoke to Shane after the bout to get his thoughts on how things went down.

“The fight actually went a little different than I expected. I thought Dolce was going to come out early and press me, cut down the distance, and try to brawl given his reach disadvantage,” said Primm. “He instead played on the outside which fit well into my game and my natural advantages.”

This Saturday July 18, Music City MMA will host “Rock & Havoc” at the Municipal Auditorium in Nashville, Tenn. Headlining the card will be Ultimate Fighter veterans Shane Primm (2-1) of TUF 8 taking on Mike Dolce (4-6) of TUF 7.

Shane Primm began his mixed martial arts training in 2004 about 45 minutes southeast of Nashville, in Murfreesboro, Tenn. at Guardian MMA. He eventually turned pro, began training at Gracie Tampa, and was cast for The Ultimate Fighter season 8.

After losing his last bout back in December against the larger and much more experienced Krzysztof Soszynski at the TUF 8 Finale, Shane is moving down to middleweight for the first time. Shane will be looking to get back on track and what better place to do it than in front of his home crowd? PRO MMA (promma.info) recently caught up with Shane for a few questions.

ESPN’s MMA LIVE is back this week with episode 32. Kenny and the boys cover The Ultimate Fighter season 8 finale, the upcoming UFC 92: The Ultimate 2008 card, they also discuss the WWE’s newest crossover star, Bobby Lashley, and much more.