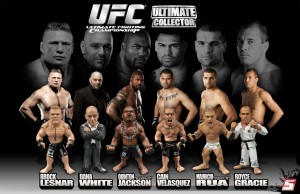 MARKHAM, Ontario, Canada, August 16, 2010 – The past, present and future of the UFC, in and out of the cage, will be on display – literally – as attendees of UFC® Fan Expo™, August 27-28 at the John B. Hynes Convention Center in Boston, will get the first look at the Round 5 “Ultimate Collector” Series 4 collectible figurines.  Fans can see new standard and Limited Edition sculpts representing seven different UFC personalities, including Royce Gracie, Brock Lesnar, Quinton “Rampage” Jackson, Cain Velasquez, Mauricio “Shogun” Rua, Dana White (regular only) and Bruce Buffer (Limited Edition only).

Round 5 can be found at Booth No. 2524 on the convention floor.  The “Ultimate Collector” Series 4 displays are in addition to the previously announced “3-packs” featuring Buffer, exclusive to Expo in the U.S., and prototypes of its high-detail “Live” series with Randy Couture and Chuck Liddell.

Images of “Ultimate Collector” Series 4 can be viewed at http://www.round5mma.com/blog/?p=477.

“We are pleased to be introducing our latest series of new figurines to fans at UFC Fan Expo,” said Damon Lau, Round 5 president and co-founder.  “There are some completely new athletes, including Royce Gracie and Cain Velasquez, and our first ‘Ultimate Collector’ non-fighters in Dana White and Bruce Buffer.”

“Ultimate Collector” Series 4 is expected at retail in time for the 2010 Holiday season.

Fans will also be able to purchase the new “Ultimate Collector” Series 3 figurines at the Expo, including new representations of Rich Franklin, Anderson Silva, Antonio Nogueira, Diego Sanchez and both UFC and PRIDE versions of Wanderlei Silva.

“Ultimate Collector” Series 1 and 2 are now available at leading retailers across North America, and Series 3 will be available shortly.  A list of retailers can be found at www.Round5MMA.com.

About Round 5
Round 5 (www.Round5MMA.com), headquartered in Markham, Ontario, Canada, is the MMA industry’s fastest growing worldwide collectible figure company. Committed to developing intricately detailed figures, Round 5 strives to remain true to the sport of MMA and its personalities.

2 thoughts on “Round 5 to give first look at Series 4 with Dana White, Royce Gracie, Brock Lesnar at UFC Fan Expo in Boston”