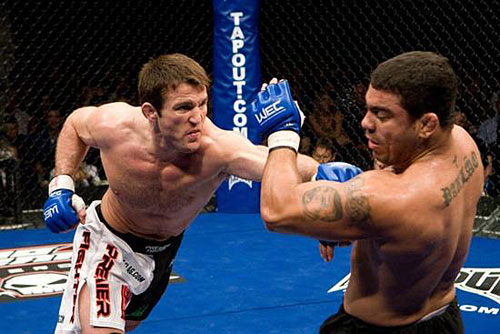 The next challenger to Anderson Silva’s title moved a little bit closer to a seat in the Oregon House of Representatives. On Tuesday, he took 99.13 percent of the vote in the Republican primary of Oregon’s 37th district. 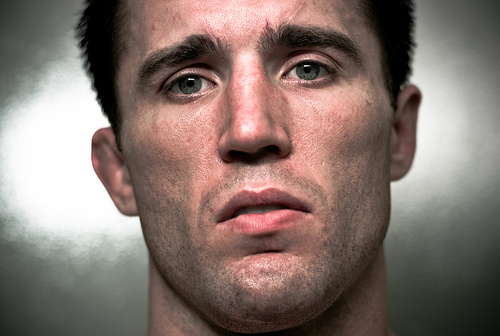 Imagine you are a cage fighter… you go to the gym every day and work out with some of the top mixed martial arts fighters in the world. You just got finished with one of your training sessions and you sit down to talk to one of your training partners. His name is Chael Sonnen, … Read more

Evan Dunham (8-0) is a 27-year-old undefeated professional fighter from Oregon. His first fight in the Octagon was against Per Eklund at UFC 95 in England. Evan won the fight by TKO just a little over two minutes into round one.

This Saturday night at UFC 102, Evan will be taking a huge step up in competition as he faces Marcus “Maximus” Aurelio (18-7). Aurelio has been fighting professionally since 2002 and has been in the cage with most of the world’s top lightweights.

Evan spoke with PRO MMA (promma.info) on Thursday and talked about how it feels to be fighting in Portland, what his mindset is as he gets ready to face a veteran like Aurelio, who has been helping him prepare for this fight, and much more.

UFC fans from around the world will be able to watch Thursday’s UFC 102 press conference live from Portland, Ore. in a free online stream right here at PRO MMA (promma.info) beginning at 4:00 p.m. ET / 1:00 p.m. PT.

PRO MMA (promma.info) will also be hosting a live stream of Friday’s UFC 102 weigh-iins and then the UFC 102 post-fight press conference Saturday night following the fights.

PRO MMA (promma.info) is your one stop resource for all things UFC and mixed martial arts. The live stream will begin automatically at the appropriate times.

Get a look at Randy Couture as he steps up his training to take on Minotauro Nogueira for “UFC 102: Couture vs. Nogueira” on Sat., Aug. 29, live on Pay-Per-View from the Rose Garden in Portland, Ore.

PRO MMA (promma.info) along with other members of the media, took part in a UFC 102 conference call on Tues., Aug. 18, with Randy “The Natural” Couture (16-9) and Antonio Rodrigo “Minotauro” Nogueira (31-5-1). The two fighters will headline UFC 102 which is set to take place on Aug. 29 at the Rose Garden Arena … Read more

It seems light heavyweight fighter Matt Hamill has suffered a knee injury and has been forced to pull out of his UFC 102 bout against Brandon Vera set for Aug. 29 in Portland, Ore.

Stepping in for the injured Deaflympic gold-medalist will be The Ultimate Fighter season 8 veteran and Team Quest fighter Krzysztof Soszynski according to Sherdog.com.

Soszynski (18-8-1) is currently on a six fight win streak with his most recent victories coming against Brian Stann at UFC 97 and BJJ black belt Andre Gusmau at UFC 98. His last loss was against Ben Rothwell in the IFL 2007 semi-finals.

The UFC made the official announcement today that MMA legends and former UFC champions Randy “The Natural” Couture will face Antonio Rodrigo “Minotauro” Nogueira on Saturday, Aug. 29, 2009 in the main event at “UFC 102: Couture vs. Nogueira.”

The event, which will take place and air live on pay-per-view from the Rose Garden in Portland, Ore., will mark the UFC’s first foray into the Beaver State. Couture spent much of his athletic career in Oregon, helped establish Team Quest in Gresham, and worked as assistant wrestling coach at Oregon State University in Corvallis.

In a press release PRO MMA (promma.info) received today from the UFC, Couture spoke about being matched-up against “Big Nog” who is known for being one of the toughest fighters to finish in the sport, “Nogueira is the type of fighter that is dangerous everywhere. He’s difficult to knock out and he’s a world class jiu-jitsu player. I will have to train very diligently and very specifically for him. Also, the fact that I’m fighting in Oregon makes me want to put on a great show and win for these fans.”

Josh Neer (25-7-1) was originally due to fight Kurt Pellegrino (13-4) on August 5th at UFC Fight Night 19. According to Neer’s management in an email received by PRO MMA (promma.info) this evening, the fight has been moved to UFC 101 which has a tentative date of August 8th.

Bout agreements have not yet been signed and the location is still being determined. Portland, Oregon was the first destination rumored for the lightweight match up, but now it appears Philadelphia, Pennsylvania is the most probable destination.