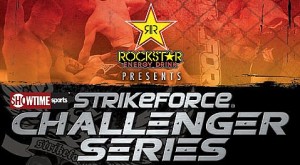 PORTLAND (April 12, 2010) –Middleweight (185 pounds) Mixed Martial Arts (MMA) superstar and former Olympic wrestling silver medalist Matt “The Law” Lindland (21-7) will return to the cage in the main event of a STRIKEFORCE Challengers event at Rose Garden Arena in Portland, Oregon on Friday, May 21.

Undefeated, rising star Tyron “T-Wood” Woodley (6-0) will face off with fellow welterweight (170 pounds) Nathan Coy (8-2) while 135 pound female prospects Kerry Vera (2-0) and Julianna “The Venezuelan Vixen” Pena (2-0) will collide with one another on the card.

Tickets for the event go on sale to the general public at 10 a.m. PT on Friday, April 16 and can be purchased at the Rose Quarter Box Office, all participating Safeway/ TicketsWest outlets, or by calling 877.789.ROSE (7673), as well as online at ComcastTIX.com and STRIKEFORCE’s official website (www.strikeforce.com).

Lindland, who captured the silver medal in Greco Roman wrestling while representing The United States at the 2000 Summer Olympics, is also a former All-American wrestler for University of Nebraska and the 1993 NCAA Big Eight conference champion.  The 39-year-old will look to re-enter the win column after two consecutive defeats, the last of which he suffered by way of first round submission (arm triangle choke) to superstar Ronaldo “Jacare” Souza at STRIKEFORCE: Evolution on December 19, 2009.

During his stellar 13 year MMA career, the 6 foot Lindland, who hails from Oregon City, Oregon, has triumphed over a number of all-time greats including former UFC champions Pat Miletich and Carlos Newton.

Two years ago, Lindland entered the world of politics, winning the Oregon Republican Party’s nomination for the House of Representatives before being defeated in the general election.

One of MMA’s fastest rising stars, the undefeated, 28-year-old Woodley of St. Louis, Missouri is a two-time All-American NCAA wrestler for University of Missouri.  His superior wrestling skills have been the foundation of his success in the cage, leading him to submission victories over each of his opponents, including his last victim, Rudy Bears, whom Woodley tapped out with an arm triangle choke in the first round (2:52) of their main event matchup at the STRIKEFORCE Challengers event at Kansas City, Kansas’ Memorial Hall on November 20, 2009.

Woodley’s opponent, Coy, is also an expert in submissions and a former wrestling star for Oregon State University.  Coy will put a three fight winning streak on the line that began with a first round (3:39) TKO of Jesse “J.T.” Money Taylor on July 25, 2009.

In his last start, Coy forced Travis Bush to tap out from strikes just 16 seconds into their meeting at Spirit Mountain Casino in Grande Ronde, Oregon on March 12.

The 28-year-old Vera, the wife of MMA star Brandon Vera and resident of San Diego, California, made a splash debut with STRIKEFORCE on November 20, 2009 when she battered Kim Couture with superior striking skills and brought about a TKO in the first round (3:35) of their matchup  with an onslaught of punches.

Inspired by Bruce Lee movies and The Karate Kid at the age of six, Vera, a tomboy, took up Tae Kwon Do and, later, boxing and kickboxing before turning to world’s fastest growing spot – MMA.

In her last start, Pena engaged in an all out slugfest with Stephanie Webber, before submitting Webber with an armbar in the second round (2:54) of action.

Pena, whose pretty smile is a stark contrast to her darker side, has ambitions that extend beyond the cage.  To date, she has been using her earnings from competition to further her education at Spokane Community College.

The event will be televised live on SHOWTIME® at 11 p.m. ET/PT (delayed on the West Coast).