I feel like we are watching reruns of a bad movie here. A fighter retires, that fighter spends their time on social media telling everyone they are retired, and a few months later there is some reason that got them to come back to the game that to be honest we all know they never … Read more

The much hyped Conor McGregor: Notorious is finally being released by Trafalgar Releasing in U.S. theaters for one night. The film has a bonus interview with McGregor that was filmed in Dublin. It chronicles the rags to riches story of the Irishman from nothing to the $100M man. It was shot over the course of four years and you can check it out on November 8th. 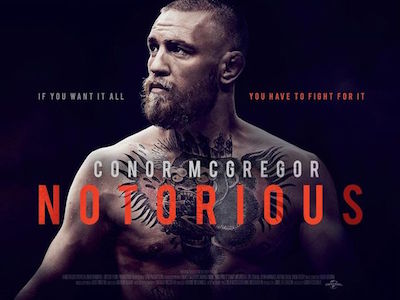 “If you want it all, you have to fight for it.” That’s the tag line for the new Conor McGregor film from Universal entitled “Notorious” which is due to hit theaters in November. SYNOPSIS: Filmed over the course of 4 years, Notorious is the exclusive, all-access account of Conor’s meteoric rise from claiming benefits and … Read more

Remember Jesse Taylor from The Ultimate Fighter season 7? He is the Big John McCarthy look-alike who made UFC history by being the only person ever to get kicked off The Ultimate Fighter and out of the UFC AFTER the show had ended and before he could ever have an actual fight in the UFC. Taylor caused a scene at a Fertitta-owned casino in Las Vegas that spawned UFC president, Dana White to give Taylor the boot.

Taylor sought treatment for his alcohol-related foolishness, made amends with the UFC and White, and was granted a fight in July against fellow TUF cast member, C.B. Dolloway. Taylor lost that fight and then later the same evening at an after-party, was once again involved in some foolishness that caused the UFC to release him for the second time in four months.

However, Jesse Taylor has proved there is obviously life after the UFC by securing a deal with Total Combat to fight on October 2nd in San Diego, California. Total Combat has been bringing exciting MMA action to fans since 2003 when they held their very first show in Tiajuana, Mexico. Now it’s five years later and they are on their 32nd event. That’s pretty impressive. Let’s see if Taylor can be as impressive when he steps in the cage to fight another man known for controversy, UFC veteran Drew Fickett. This Total Combat event has been appropriately named, “Notorious”.