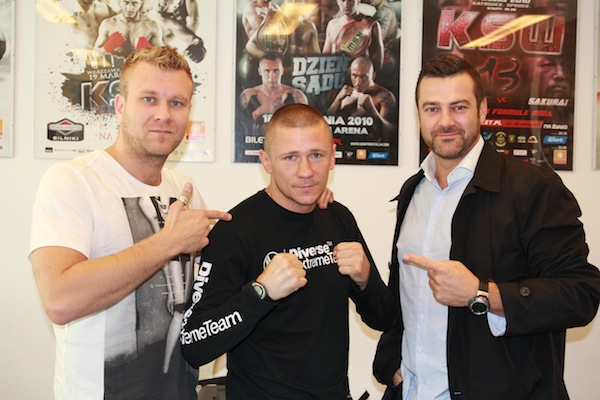 Mariusz Pudzianowski and “The Colossus” James Thompson are set to clash this summer at KSW 16 in Sopot, Poland.

This interview was sent to us and is published courtesy of KSW Spokesperson Artur Przybysz. World’s Strongest Man’s next MMA fight is only nine weeks away. I met Mariusz Pudzianowski in Olsztyn and I decided to ask him about his preparations for KSW 13, his fight in USA and future plans. Here is the interview. Mariusz … Read more

On May 7th 2010 Polish fans once again will get the chance to see world class MMA action. For the first time in history Martial Arts Confrontation show will take place in Spodek in Katowice, Silesia, a venue, which hosted the biggest and most prestigious sports and entertainment events in Poland. – Warsaw’s Torwar hall … Read more

Look out heavyweights! There’s a new beast in town! His name is Mariusz Pudzianowski and he just won his first MMA fight in Poland over Marcin Najman. Sure Najman was pretty much just a boxer and Pudzianowski was wearing shoes… but still… the dude does look impressive. The 5x “World’s Strongest Man” champion broke one … Read more

On the eve of UFC 107 in Memphis, Tenn., a significant portion of the hardcore MMA world’s attention was turned toward Warsaw, Poland, tonight as five-time “World’s Strongest Man” Mariusz Pudzianowski made his MMA debut against professional boxer Marcin Najman at KSW 12.

Najman had said prior to the bout that he wanted to use his boxing technique to defeat Pudzianowski. However, the strong man gave him no such opportunity to stand there and throw punches. Pudzianowski started the fight by delivering brutal leg kicks to Najman. These are the same kicks that broke one of his sparring partner”s legs with one blow in preparation for this fight.

The leg kicks dropped Najman to the mat, from there, Pudzianowski used his massive arms and fists to pulverize the boxer with ground and pound until the referee was forced to stop the fight just 44 seconds into the first round. And just like that, Mariusz Pudzianowski won his professional MMA debut.