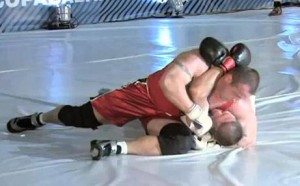 Pudzianowski’s most recent fight was against former UFC heavyweight champion Tim Sylvia. The two locked horns at “Moosin: God of Martial Arts” in May. The bout simply showed that Pudzianowski had bitten off too much too soon and suffered a second round stoppage.

In a recent interview with Polish website wp.pl Pudzianowski said he did not regret taking the fight with Sylvia because it revealed his weaknesses that he needed to work on. Also, apparently the strong man has dropped some weight. Regarding this he said,

“This is simply indescribable. It is as if removed from 1920 to 1930 pound bag. The difference is significant. I’m faster, better endurance, agility, dynamics. I hope that September 18 will see my win.”

Pudzianowski says he has been training hard for four months for Butterbean and spoke of his preparation.

“I fight a boxer, so I have to watch out for his hands. When the opportunity arises, one hundred percent of the power and throw it, and then ‘manipulate’ it in the ground floor. For sure I will have to work hard on tight. He weighs 180 kilograms, so knock it will not be so simple.”

The good news is Pudzianowski is still working on his game and wants to continue even after a hard loss. That shows his heart. In the following video provided by KSW Pudzianowski is shown training and preparing for the fight.