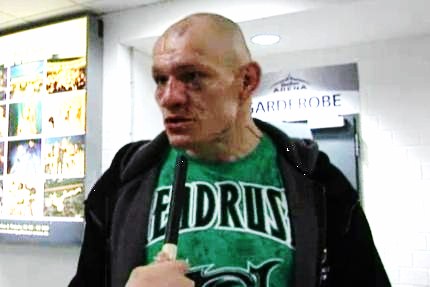 UFC light heavyweight Krzysztof Soszynski (26-12-1) has retired from fighting. The 37-year-old Pole made the announcement on AXS TV’s Inside MMA Friday night, citing short term memory loss as one of the primary reasons. Kyzysztof suffered a KO loss to Igor Pokrajac at UFC 140 in Dec. 2011, and he said it was the first … Read more

UFC and IFL veteran Mike Ciesnolevicz discusses his UFC stint, his release from the organization, and his decision to leave the Pat Miletich camp in this exclusive interview.

CHICAGO, Ill. (February 18, 2010) – Bellator Fighting Championships put yet another piece in place for its upcoming Season 2 featherweight tournament today with the signing of 5-2 Shad Lierley, a former International Fight League (IFL) standout and elite-level college wrestler. The 29-year-old Lierley—who was a top college wrestler while earning his bachelor’s degree in … Read more

The year was 2002. The organization was UNITED STATES MIXED MARTIAL ARTS. The name of the show was “USMMA 2: RING OF FURY” and it took place in Lowell, Massachusetts on September 21st at the Tsongas Arena. In this edition of PRO MMA’s (promma.info) “MMA FLASHBACK” we are focusing on the heavyweight co-main event title fight between a young 20-year-old kid named Ben Rothwell and 25-year-old Johnathan Ivey (Travis Lutter was fighting Jorge Rivera in the main event on this card).

Most people now know Ben Rothwell as the fighter who went undefeated and dominated the IFL heavyweight division as a member of Pat Miletich’s Quad-City Silverbacks. After the IFL shut down it was time for Rothwell to really test himself. He faced former UFC Heavyweight Champion Andrei Arlovski at “Affliction:Banned” in July 2008. It just so happened that the “old Pitbull” decided to show up that night and left Rothwell crumpled on the canvas after a vicious knockout. However, Rothwell bounced back in his next and most recent fight last December at “Adrenaline MMA 2” and finished off one Chris Guillen midway through round one via submission from elbow strikes.

IFL veteran and UFC newcomer, Mike Ciesnolevicz took his most recent fight, which was at UFC 95 against Neil Grove, on about two weeks notice. Mike C. submitted Grove with a heel hook in just 1:03 of the first round. He was giving up six inches in height and about thirty pounds in weight to … Read more

Another Pat Miletich product made an impressive debut this past weekend when Mike Ciesnolevicz (17-3-1 NC) forced Neil Grove (7-2) to tap in just 1:03 of the first round due to a nasty heel hook. Miletich Fighting Systems has long been considered one of the top teams in MMA having produced such fighters and champions as Matt Hughes, Jens Pulver, Robbie Lawler and Tim Sylvia just to name a few. If you named all the fighters who came up through the Miletich System and have trained there from time to time it would read as a who’s who of MMA fighters.

At UFC 95 this past Satuday, Ciesnolevicz kept the ball rolling. While this was Ciesnolevicz’s first actual fight in the UFC, he is no stranger to the big time as he has often been a cornerman for other M.F.S. fighters in the past. Before getting his shot in the UFC, Ciesnolevicz was a mainstay for the now defunct IFL promotion. He went 5-3-1NC in the IFL and was a part of two championship teams as a member of the Quad City Silverbacks coached by Pat Miletich.

Never a loss for words, Millen had a few choice comments about White and the UFC’s business practices of counter programming Affliction events. The V.P. talked about the future of Affliction, the failures of Elite XC and the IFL, the UFC and Dana White.

According to an autopsy report, WEC, UFC, and IFL veteran, Justin Levens and his wife Sarah who were found shot to death in their home on Wednesday, had been dead four days.

Investigators did not find a suicide note, however, they do believe the deaths were the result of a murder-suicide based on the position of the bodies and the gun that was retrieved from the scene.