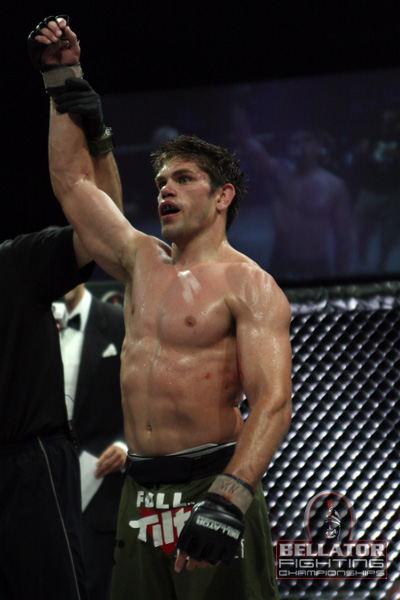 The 29-year-old Lierley—who was a top college wrestler while earning his bachelor’s degree in economics and political science at New York University—is perhaps best-known for his legendary 2007 fight against one-time IFL poster boy Chris Horodecki. Despite his wrestling background (and the fact that he was fighting at 155 lbs.), Lierley stood toe-to-toe with Horodecki for three full rounds, delivering one of the most dramatic and action-packed fights in the IFL’s short history.

“Shad Lierley has been part of some great fights. If you ever want to see an awesome highlight reel watch his fight with Chris Horodecki, which Shad took at 155 even though he’s a legit 145 fighter,” said Bellator founder and CEO Bjorn Rebney. “He is another solid addition to our featherweight tournament.”

Leirley is the seventh featherweight to be announced as a participant in the eight-man tournament along with Georgi Karakhanyan, Joe Warren, Patricio Pitbull, Bao Quach, William Romero and Wilson Reis. Bellator will also conduct tournaments at 155, 170 and 185 lbs. with the winners in each division being declared No. 1 contenders to the current Bellator champions.

Each of Bellator’s 24 Season 2 and 3 events will be broadcast on FOX Sports Net, NBC and Telemundo.

Lierley was born in Utah but moved at a young age to Alaska with his parents and eight siblings. He was a four-time state wrestling finalist and was named as Alaska’s Wrestler of the Year during his senior year, earning him an invitation to continue his career at NYU. There, he became one of the best wrestlers in the school’s history and held the No. 1 national ranking during his sophomore year.

After graduating, Lierley considered a wide variety of career paths, but found himself being drawn toward professional fighting. In 2006, a wrestling buddy encouraged him to try out for the IFL and he earned a spot in that organization.

“When I started college, I never planned to get involved in MMA, but it’s what I fell into and I couldn’t be happier,” he said. “There are a lot of well-educated people who have a lot of options in front of them and they choose fighting. It’s a great sport and I’m proud to be a part of it.”

As a professional, Lierley is a perfect 5-0 when fighting at 145, with his only two losses (against Horodecki and eventual IFL Featherweight Champion Wagnney Fabiano) coming at 155. His most recent win came during Bellator IX last May in Monroe, La.

“I found out then that Bellator is just an awesome organization,” Lierley said. “They’re doing some great things in MMA and the talent they’ve been recruiting is just phenomenal. There’s going to be a lot of fireworks come springtime and I think I’m going to be a part of that. I wouldn’t have signed if I didn’t think I could win this tournament.”