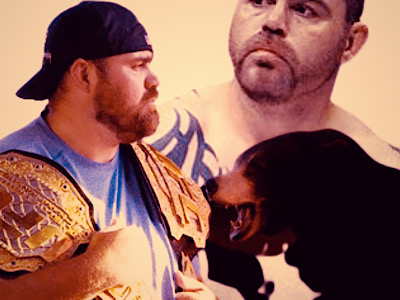 Former UFC heavyweight champion Tim Sylvia has never had a problem speaking his mind. As one of the tallest competitors in mixed martial arts history he has received the standard “he’s only good because he’s tall“ criticism. He has had his ups and downs in the sport including having his arm broken by Frank Mir, allegedly soiling himself while fighting Assuerio Silva, and getting his belt taken relatively easily by a 43 year old Randy Couture.

Tim loved being champion so much so that pictures of him wearing the belt at the supermarket, hunting, and in various other public places began to surface. I have personally trained with Tim a couple of times and he’s one of the nicest guys, and most genuine people that you will ever meet. When he wore that belt it was because it meant a great deal to him.

After leaving the UFC things did not go so well for him. His injuries started taking their toll and it showed in his performances. Potentially the most embarrassing point of his career came in his second fight after leaving The Octagon behind. He took on former boxing champion Ray Mercer in a regional promotion and was toppled like tree, falling stiff to the mat, unconscious in just 9 seconds.

It wasn’t all bad, though. Tim would win 7 of his next 8 with a notable knockout win over fellow heavyweight skyscraper and UFC vet Paul Buentello. His career finally came to an end after dropping three straight and then being unable to pass a pre fight physical with the doctor determining, according to Tim’s own Manager, he was “too fat to fight“. That didn’t stop Sylvia from trying to make his way back to the UFC for one more run. It never materialized for him, unfortunately.

He wasn’t done with the organization by a long shot. Tim began asking Dana White on social media to help pay for some medical expenses he claims were caused by his tenure in the company. According to reports those requests were never answered and by all accounts Sylvia has not let it go.

Reacting to Jake Paul’s current social media beef with Dana White, he praised Jake on Twitter and dissed the UFC for ignoring his medical pleas.

Say what you want about Jake but he genuinely seems to care about the pay disparity between boxers and mixed martial artists. Jake has made a name for himself in freak show boxing matches but he would become a legend if he jumped to Bellator or the UFC and started winning fights there.

As for Tim, we wish him the best because he has been out of the spotlight long enough that newer fans don’t understand what he contributed to the sport and its growth. He most definitely accrued a lot of injuries during his time under the UFC banner.