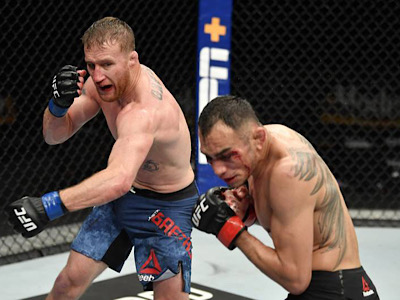 UFC Interim lightweight champion Justin Gaethje has quickly become a fan favorite for his honesty and aggressiveness inside the cage. He might just be one of the most real fighters to ever compete in the UFC when it comes to just being himself and not a character. Maybe that’s why his straightforward comments on Conor McGregor didn’t surprise us much.

Justin was asked what his thoughts are on Conor McGregor retiring and what the situation would have to look like for the Irishman to come back. His take on it is realistic in its simplicity. Justin believes that Conor McGregor should wait for lightweight champion Khabib Nurmagomedov to return and the winner of their fight should be McGregor’s opponent. Gaethje also made a good point that Nurmagomedov winning might not bring Conor back as much as himself.

The interim lightweight champion went on to say that Conor McGregor is a legend that he can’t wait to punch in the face. Check it out.