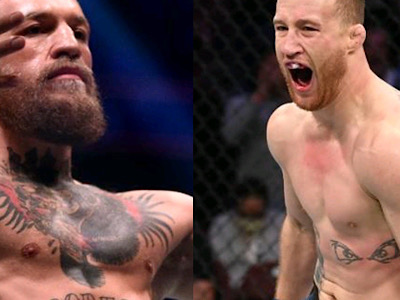 I sincerely hope that this is going to happen.

Ariel Helwani is reporting that Conor McGregor and Justin Gaethje may get the bout they mutually want. The pair have both KO’d Cowboy Cerrone in their last bouts respectively and have been vocal about wanting a bigger fight. Other than a rematch with Floyd Mayweather Jr or Khabib Nurmagomedov it doesn’t get more intriguing than this. Twitter user @jedigoodman shared the following on social media…

A fight like this would serve to answer a lot of questions. Where is Conor’s head at? Has he lost a step? Can Justin Gaethje definitively stamp his ticket for a title shot by finishing him? Is Gaethje ready for prime time? I can tell you as a fan I want this potential fight more than any other they could make for McGregor.

A summer match up would mean Justin would have to sit out between 7-9 months. I doubt he would mind given the potential payday a fight with the Irishman would bring. Will it happen? Who knows because McGregor is all about those big dollar bouts and Justin isn’t a proven draw yet. This means Conor’s star power would have to carry the buy rate for the event.

What do you think? Would you like to see this fight?