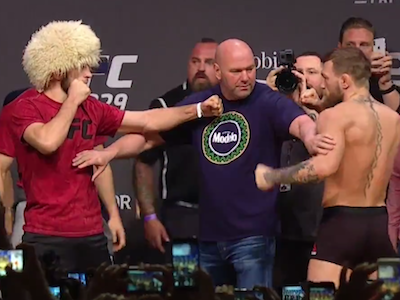 Conor McGregor return to headline UFC 246 and produced a stunning display to dispatch of Donald Cerrone just 40 seconds into the opening round. The event proved to be popular with punters, with stakes matching sports like horse racing and football. Both renowned as being very popular for punters and bookmakers a like. McGregor started as the overwhelming favourite and duly obliged, setting up an exciting period ahead for the rejuvenated Irishman.

His coach has now stated that a ‘motivated’ Conor McGregor can beat anyone, so he is not fussed about his next opponent. A trilogy with Nate Diaz looks likely to happen in the future, something that Conor has continued to reiterate. Former champion Michael Bisping recently stated, that he things that fight could be next and would result in an easy victory for McGregor.

McGregor continues to call for the rematch with Khabib Nurmagomedov, a fight he lost back at UFC 229 in 2018. Khabib has since gone on to defend his title against Dustin Poirier at UFC 242 and will now face off against Tony Ferguson at UFC 249 in April. This is a hugely anticipated rematch, with the winner most likely to then defend their title against McGregor. The Russian will be the favourite for the UFC 249 contest but Ferguson brings in a formidable record, having won his last 12 fights in succession. He could easily end the unbeaten run of Khabib and set himself up for the big money fight with McGregor.

The victory for McGregor meant he extended his professional record to 22 wins and four loses. This also meant a first victory in nearly four years, since his UFC 205 TKO defeat of Eddie Alvarez. That victory also meant he became a two division champion at the time. Prior to that he had avenged his shock UFC 196 defeat against Nate Diaz, by winning in a decision at UFC 202.

These all set him up for the hugely anticipated clash with Khabib Nurmagomedov at UFC 229. This proved to be the biggest event in the history of the UFC, with a build-up of bad blood between the two teams. This continued on fight night and it has not changed moving forward. This is why the match-up is still very much of interest by fight fans and why it would likely again shatter all records.

McGregor has returned with a very impressive victory and it all sets up for an exciting period ahead, as the 31 year old now appears as motivated as ever.