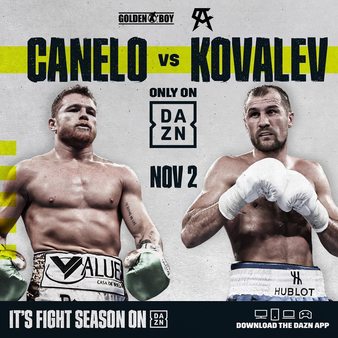 Three-weight division world champion Canelo Álvarez takes on three-time and defending WBO light heavyweight Sergey Kovalev on November 2nd at the iconic MGM Grand Garden Arena, Las Vegas. While many are already looking up the latest Kovalev vs Canelo odds, there are plenty of other talking points to consider ahead of their bout.

The Mexican has predominantly fought at middleweight level, but will be jumping up two divisions to heavyweight in a bid to wrangle the WBO belt from Kovalev’s grasp. During his last fight in May, Canelo managed to retain four of his titles, while gaining the IBF middleweight title from opponent Daniel Jacobs. Many have questioned whether Canelo can indeed step up to the plate and whether or not it’s a one-off at this level.

It’s not the first time Canelo has fought above the 160lb middleweight limit, with two step-up bouts taking place in the last couple of years. His first came against fellow countryman Julio César Chávez Jr, a fight he won by unanimous decision, before returning to the middleweight division. The most recent came against Brit Rocky Fielding, in which he won the WBA super middleweight title by technical knockout in round three, again moving back to middleweight level to take on Jacobs.

During a recent press conference, he revealed: “I will be on weight, I plan to (officially) weigh 175 pounds… I’ve been doing more weightlifting. We are not lifting heavy, just doing more reps. We are eating more protein, more carbs and putting on weight the right way.”

The use of performance-enhancing drugs (PEDs) and the importance of VADA testing is an ongoing issue in the sport. Both boxers have been accused of using PEDs in the past and in the case of Canelo, he was found guilty of failing not one, but two drugs tests.

Ahead of his bout at the end of August against Anthony Yarde, Kovalev was VADA-tested and completed the programme amidst fears from his opponent that he would not comply. As recently as last month, Canelo enrolled back onto the programme, to be checked ahead of the fight on November 2nd. He was previously banned for six months having tested positive for clenbuterol, which he said was down to eating contaminated meat.

Ex-boxer and former two-weight world champion Paulie Malignaggi isn’t one to mince his words, but having previously felt strongly about the subject, his views have recently taken a u-turn. Talking about the upcoming Canelo vs Kovalev fight, he said: “I don’t even talk about that fight. It’s gotten so ridiculous.

“I don’t care what testing it has, I don’t wanna talk about the fight. You’re basically spitting in the face of the sport at this point.

“After Canelo failed a drugs test and got a slap on the wrist, I kind of started to side with all the fighters that are doing PEDs now.”

In the lead-up to this bout, there has been no trash talk, no bravado or overconfidence, just two boxers who seemingly have a mutual respect for one another.

For Canelo, victory over the 36-year-old Russian would see him become only the fourth Mexican boxer to hold titles in four different weight divisions. Ahead of their showdown, during a Los Angeles press conference, he said: “I know it’s going to be the most difficult fight of my profession. I’m aware it’s going to be a really difficult fight. And that day I’m going to put all my strength and effort into the ring.” He also stated that he had the chance to meet Kovalev in 2012, before continuing: “and now we’re about to share the ring and make history here.”

Meanwhile, “The Krusher” took to Instagram to post a photo of him and Canelo together, with a throwback from their previous meeting. Both boxers were all smiles, shook hands and even gave each other a thumbs up as they promoted their Las Vegas fight.

It’s sure to be a decent battle, with Canelo looking to make a massive step-up, while Kovalev’s form has declined since his peak days. We expect this to be a close fight in the early rounds but believe the Mexican has what it takes to come out on top.