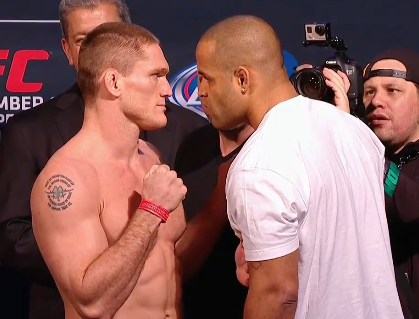 In all fairness Mr. Duffee – alot of people didn’t notice you were gone. We do like the new haircut though.

Todd Duffee was hyped as the next big thing in the UFC after knocking out Tim Hague in just 7 seconds back at UFC 102 in 2009. Then in May of next year the hype train crashed when he was knocked out cold by Mike Russow. He was cut by the UFC and vanished only to be re-hired a short time later.

After winning two in a row he had his first test in a fading Frank Mir who was 1-4 in his last 5. Duffee flunked big time and was knocked out in just over a minute. It was a miracle the UFC kept him but they did. After 4 years away from the sport the big man has returned and seems to have some sort of beef with the MMA media.

I can’t imagine why. I mean we aren’t ever brutal in our take downs of hype jobs who crash. That’s sarcasm right there folks.

With a little venom and a splash of unwarranted arrogance he lashed out at the media ahead of his clash with virtually unknown Jeff Hughes at UFC on ESPN+ 16 (UFC Fight Night 158) this Saturday.

Todd was injured and away from the sport due to multiple knee surgeries and a MRSA infection during recovery. Let me tell you he is done talking about it. Here’s what he said to the media today.

I’ve did three interviews about this. I’m tired of this, and I guess I’m taking it out on you…Cut the BS guys. Do your job. It’s the whole media blanket. Just stop the crap. I’ve done four interviews today and I’m fed up with it.

Todd, keeping it real here you should be appreciative that so many people took the time to interview you. Your last fight was a quick KO loss to Mir in 2015. Just saying.