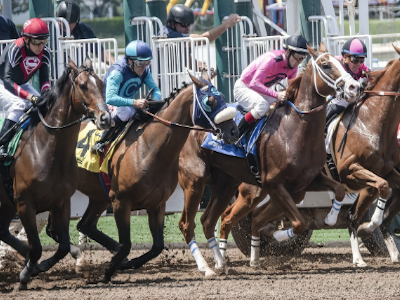 It’s no surprise that horse racing is referred to as the Sport of Kings, given that many of the biggest races have huge prizes that make this one of the richest sports in the world. Popular with fans as well as owners who want to compete in the very best races, here are some of the richest events in the world of horse racing. Some people attending this event would also be placing bets when using Timeform.

In 2017, the Pegasus World Cup took over from the Dubai World Cup as the world’s richest horse racing event. It takes place in Florida on a dirt track over one mile and two furlongs and is restricted to four-year-old and above mares and colts. Just entering this race sets owners back a staggering $1 million, so it’s exclusively for serious contenders who want to soak up the prestige of the event. But for the winner, there’s a $16 million in prize money to enjoy.

The Breeder’s Cup is not only one of the most popular races of all time but it’s also one of the world’s richest horse races, run over a distance of one and a half miles and open to three-year-old and above Thoroughbreds. Winners of the Breeder’s Cup are in it to take home the $6 million prize money.

As the finest turf race in the world, the Prix de l’Arc de Triomphe is run over a distance of 2400 metres and brings in the finest Thoroughbred talent from throughout Europe. This race offers a purse of €5 million, which is shared between the top five finishers. The stunning Parisian surroundings of the Longchamp Racecourse also help to make this one of the most spectacular races in the world.

Also known as the Tokyo Yushun, the Japanese Derby is the second richest turf race in the world and currently pays out $5.2million as a prize fund. This race is unusual as it’s heavily restricted in terms of participation by non-Japanese horses – just a few foreign-bred or trained horses are allowed to compete in this competition. The Japanese Derby is run over one mile and four furlongs and is open to three-year-old colts and fillies.

Known as the race that stops a nation, the Melbourne Cup is one of the most famous horse racing events in the world. It also happens to provide a significant prize fund which goes towards the justification for why this race is so popular among owners as well as fans. In fact, the Melbourne Cup is the world’s richest handicap flat race and pays out A $6.2 million which equates to $4.5 million in US dollars.