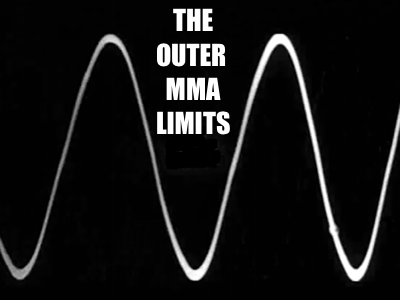 There is nothing wrong with your internet.
Do not attempt to refresh the page.
We are controlling transmission.
lf we wish to make it louder, we will bring up the volume.
lf we wish to make it softer, we will tune it to a whisper.
We will control the horizontal.
We will control the vertical.
We can roll the image, make it flutter.
We can change the focus to a soft blur or sharpen it to crystal clarity.
For the next few minutes, sit quietly and we will control all you see and hear.
We repeat, there is nothing wrong with your internet.
You are about to participate in a great adventure.
You are about to experience the awe and mystery which reaches from the inner mind to The Outer MMA Limits.

There was a time not long ago when three straight losses inside the UFC octagon would get you a one-way ticket out of the promotion. But this is a new age of MMA where legends die hard and WWE superstars can get UFC title shots at the drop of a hat despite their tainted history.

It was announced this week that former UFC welterweight and lightweight champion BJ Penn would be returning to the octagon once again. Frankly, we’re not sure how this is possible considering the 39-year-old “Prodigy” hasn’t won a fight in what will be over eight years when he steps in the cage against The Ultimate Fighter 22 winner Ryan Hall at UFC 232 in December.

Every man deserves a second chance, heck even third and fourth chances aren’t totally obscene. Five chances is obscene. Six chances is insane. At some point one has to ask, just what the hell are we doing here? It’s obvious the guy is past the time when he should be fighting the best guys in the world in mixed martial arts’ premiere organization.

Can we blame BJ for this? I blame the organization. Either your fighters represent the best the sport has to offer or they do not. If they do not, then don’t pretend they do when it’s convenient. Oh wait, that’s how marketing works. Let’s not kid ourselves any longer shall we. It’s all about the dollars. And when it’s convenient for the promotion or they get too much negative publicity then they will adjust accordingly.

Penn has lost his last five fights in a row. Who would even feel good about beating him now? Is the promotion just using him to try to boost the credibility of a rising talent? Are they doing BJ a “favor” of some sort? Apparently Penn still feels the desire to compete but so do a lot of people past their prime.

Mixed martial arts has never been a pretty sport and promoters will try to get away with what they can get away with as long as the fans keep supporting what they do. The idea of BJ Penn facing Ryan Hall is a great idea. In fact, I would love to see that match. Just not in the UFC and preferably on a grappling mat.