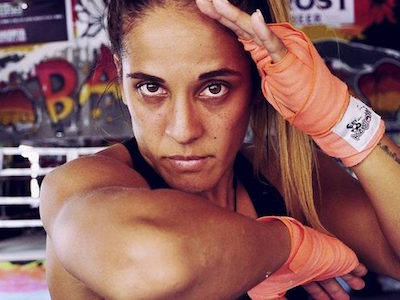 ONE Championship, the Singapore-based Mixed Martial Arts, Muay Thai, and Kickboxing promotion launched in 2011, is home to an ever-lengthening list of fighters from New Zealand, and Nyrene Crowley looks set to join the ranks, and soon.

Born and bread in Auckland, Crowley headed to Bali in September last year after leaving her trainers with an excellent impression of her skills. They submitted an application for Crowley to compete for a ONE Championship deal worth US$100 000 on the second season of the ONE Warriors Series, which runs in the same way that the UFC The Ultimate Fighter does.

Specially chosen by Rich Franklin, the one-time UFC Middleweight Champion and Vice President of the ONE Championship when she was in in Jakarta, the 28-year old will be competing four times. If she succeeds, she will become the very first woman from New Zealand to take part in the series.

Speaking of her tryouts, Crowley said that she was the only girl there, but that this was not unusual in MMA. She spoke of not really being prepared for grappling with the guys, but that it got competitive pretty quickly. Understandable, she explained, when you take into account that every athlete in the room wanted the same thing.

Crowley had glowing reports on Franklin, saying that he had a wealth of knowledge to impart thanks to his fighting background. She spoke of this being one of the aspects her home country was lacking in, where you simply didn’t have world-renowned international fighters spending a lot of time with those up-and-coming, dispensing much-need advice.

What to Expect from the First Episode

The initial show will have Franklin choosing Crowley straight after her audition, and then inviting her to join him in his charity work with children, taking particular interest in Crowley’s background.

Her sporting career is something her entire family is involved in. Her dad has played a huge part in establishing her as a force to be reckoned with, and continues to play a large role in her professional life, and Cheree Crowley, her older sister, is a pro wrestler for the US WWE, although punters who enjoy these fights alongside their AFL betting odds searches will know her as Dakota Kai.

Crowley revealed that she has been involved in some kind of sport for her whole life, and that she had her father to thank for it. She spoke of her sister and herself playing Netball, her brother being involved in Football, and her interest in Touch, Tag, and Club Rugby, along with Athletics and Weightlifting, being put firmly into place when she was still young.

She spoke of her sister’s background in pro wrestling inspiring her, and that, following Dakota Kai’s move to the United States and how well she has done there, she understood that her success was up to her, and that no dream was too big.

Crowley Is Nothing If Not Determined

Her long-term goal is getting an MMA World Title, and she’s given herself two years to do it, on any promotion. Neutron Bomb, her stage-name, looks set to hit the big time, and soon.