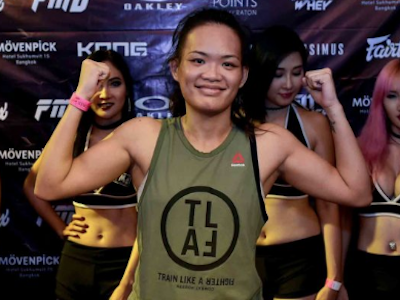 Singaporean Tiffany Teo is ready to take on Xiong Jingnan.

She is putting her unbeaten pro record on the line in the fight scheduled for tomorrow night, when she faces her Chinese opponent, but has no concerns about her readiness or preparedness to take another victory home.

The expression on Teo’s face was a grim, unsmiling one -one could go so far as to say menacing, even- as she sat in front of the filled-to-capacity room of around 250 photographers, videographers, and journalists at the Fairmont Jakarta luxury hotel for a press conference yesterday. This was in total contrast to the sweet smiles and cheerfulness she exhibited when she faced the media in smaller groups later on, as she happily obliged all the requests for a photograph she received, chatting animatedly all the while.

Teo ruefully acknowledged that she has resting bitch face, so when not she isn’t smiling she tends to come across as rather threatening.

Good Girl Gets Even Better

The 27-year MMA fighter from Singapore is a member of a school choir, a therapist working with children who have special needs, and, nowadays, a soft-spoken, albeit tattooed, warrior of the octagon. She is a walking contradiction -partly truth, and partly fiction – who may well have found her place in the world of mixed martial arts, where the traditional codes of taekwondo, wushu, wrestling, and jiu-jitsu can all be combined to the deadliest effect possible.

Teo Determined to Take On Jingnan and Win

Rebecca Heintzman, Pooja Tomar, and Walaa Abbas can all testify to the efficacy of Teo’s fighting style, all of whom she has left in her wake as she continues to compile a perfect pro record of 7 – 0.

She hopes to put China’s Xiong Jingnan on that list as well, with both women facing off for the first-ever One Championship Women’s Strawweight, 52.3 kg – 56.7 kg, belt at the Convention Centre in Jakarta tomorrow. Punters making use of mobile betting sites to enjoy the action should stay on their toes -it’s gonna be big!

Teo testified that she has been working on a specific game plan for the fight against Xiong for around two weeks, and stated that she is confident that she will win.

Her Coach is Sure of the Win As Well

Luke Adams, Teo’s coach, said that his fighter was strong on the ground and in terms of grappling, and that he was of the opinion that she could easily go five rounds. He added that she brought everything she had to each encounter, and that he felt that this was just the start of great performances ahead.

Xiong Will Let Her Actions State Her Position

Xiong, cut a similarly confident figure during the press conference, and said that she was very mindful of respecting her opponents, and that Teo was no different. She ended off by saying that she would let her efforts do the talking on Saturday, and added that her plan was to globally showcase the strength of China.