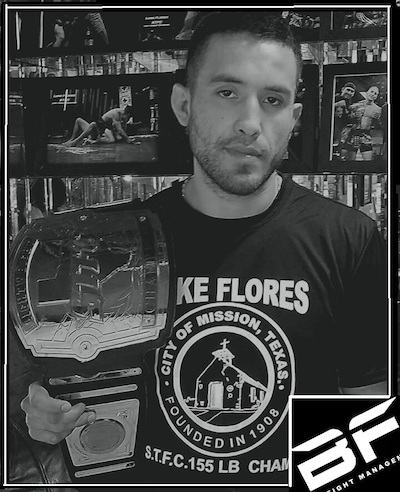 Jose “Luke” Flores is unbeaten in his pro MMA career with seven wins and six by stoppage. The 29-year-old Texas lightweight will be featured on the upcoming episode of Dana White’s Tuesday Night Contender Series where he will face fellow undefeated prospect Matt Frevola. Luke is managed by Wade Hampel of Big Fight Management. Pro MMA Now recently caught up with Luke to learn more about his MMA journey and get his thoughts on his upcoming opponent.

When did you start training MMA?

I started training MMA in 2009. Mixed Martial Arts in the Rio Grande Valley was very delayed so the beginning of my MMA career was quite frustrating. I basically went to the closest fight studio that offered “martial arts” and was their guinea pig. I started amateur fights at 170 pounds….which is ridiculous because I now fight at 155 pounds. That fight studio lacked knowledge of what MMA is really about. I took two years off fighting to direct my focus on Brazilian Jiu-jitsu. At this time, I started training with former UFC fighter Frank Trevino. I won an amateur championship in 2013 and a professional championship in 2015. I started training with UFC fighter and 3rd degree black belt in Brazilian Jiu-jitsu Carlos Diego Ferriera shortly after this fight. Having both Frank Trevino and Carlos Diego as my coaches makes me feel like I have a pretty solid team.

What made you want to start training MMA?

Something about fighting has always intrigued me. No other sport has given me that drive to continue pursuing. Fighting is just something I couldn’t and can’t stop doing. If I didn’t have fighting ….I’d probably go insane polluting my body and getting into trouble.

What MMA titles do you hold?

What do you think about your opponent in the upcoming fight at the Dana White’s Contenders?

At this point, it doesn’t matter who my opponent is. I will fight whoever. My training gets better everyday and that’s what I focus on. I focus on becoming the best version of me. My opponent is like any other person trying to give me a loss and I’m going to stop him.