There hasn’t been a boxing spectacle of this magnitude since Mayweather vs. Pacquiao bored the masses with friendly fisticuffs. The clash of the boxing world with the MMA universe has created unprecedented interest in this bout, which will also serve as an unofficial referendum that compares the skills of mixed martial artists with those of a fighter trained in the sweet science.

One of the easiest ways to get an inside peek at the likely outcome of this highly-anticipated superfight involves taking a look at the Mayweather vs. McGregor odds prop bets. Sportsbooks aren’t always perfect with their predictions, but the odds they offer do reveal the future of the Mayweather-McGregor fight.

McGregor instantly ratcheted up the rivalry when he boldly predicted that he would stop Mayweather within four rounds during the infamous series of press conferences before the fight. All prizefighters, boxers, MMA or otherwise, need to have a strong sense of confidence before entering the battle. Conor’s no exception, and his swagger has served him well throughout his illustrious career.

The numbers suggest that Conor’s confidence is most likely misplaced.  Sportsbooks have listed his “inside four rounds” guarantee as a bohemoth underdog, while attaching a significant, favorite moneyline to any other result occurring during the fight. Put simply, the experts don’t think Conor has a chance of ending the fight so quickly. 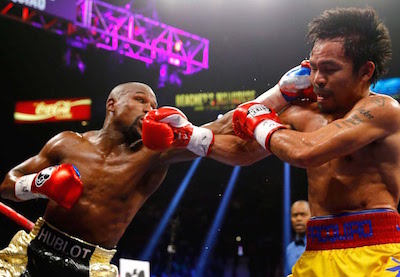 Will Either Fighter Be Knocked Down Or Out?

Floyd has famously avoided taking the type of damage that results in a knockout, underlying his elite expertise as a defensive fighter. Opponents have had such a difficult time keeping up with Mayweather that he’s only touched the canvas a couple of times in his pro career. One of those occasions was ruled a slip, while the other seemed to happen because Floyd hurt his hand instead of absorbing a devastating shot.

Considering that sportsbooks list no knockouts or knockdowns as a strong underdog suggests that Conor will be the one who receives at least one critical blow. During the early rounds, Conor will have a chance to catch Floyd unawares, but the most likely of the two to hit the canvas is McGregor. After all, reports have leaked that Conor was knocked out by Bradley Wheeler during a sparring session.

Will the Fight Go The Distance?

Floyd Mayweather hasn’t finished an opponent via KO for nearly six years, earning unanimous or majority decision victories over his past seven fights. His knockout ratio is barely above 50%, which is relatively low given his status as one of the most successful boxers in history.

Despite this trend, the numbers suggest that the favored result for this fight will be a stoppage before twelve rounds. This reflects the fact that the vast majority of the boxing community believes that Conor doesn’t have the skill necessary to hang with an all-time great.

Will Conor McGregor Throw a Kick?

The media circus that surrounds this fight has spawned numerous memes on social media, including a hilarious Mike Tyson’s Punch-Out! parody that ends with Conor earning a KO over Floyd with a swift kick.

McGregor’s contract includes a clause which will cost Conor massive sums of money if he does throw a kick during the fight, which almost ensures that he won’t resort to MMA moves after getting popped with counterpunches. For wagering purposes, Conor must be disqualified or receive a point deduction for the ‘yes’ bet to win, so don’t expect free money if Floyd accidentally gets a boot to the shin.

This prop bet confirms that an actual boxing match will take place on August 26th, even if Conor appears to be comprehensively outmatched every step of the way.