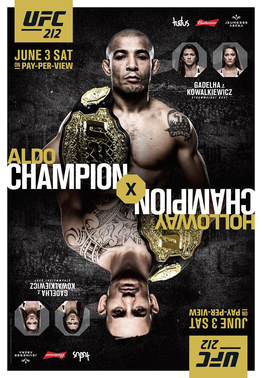 ProMMAnow.com will provide live results for Saturday’s UFC 212 card and play-by-play of the pay-per-view main card headlined with a featherweight championship unification bout between Jose Aldo and Max Holloway. Early prelims kickoff at 6:30 p.m. ET, moving to the FS1 prelims at 8 p.m. ET, and the PPV main card at 10 p.m. ET.

Round 2 – Hard body kick from Silva. Low kick from silva. Then one inside. Silva with a punch combo. Nice short right from Silva, Yancy calls him to bring it on. Lead left hook from Yancy, but Silva lands a combo in return. Overhand right, then a left hook from Yancy drops Silva hard. Yancy follows up with punches for the finish.

Round 2 – Bamgbose expended an enormous amount of energy in the first round. Paulo stalking. Chopping right hand from Bamgbose. Paulo scores with a high kick. Nice body/head combo from Bamgbose but he gets dropped with a low kick. Paulo follows up with an ungodly flurry of punches while hovering over him and it’s all over. They shake and hug it out afterward. Fun fight.

Round 1 – Post-TRT Belfort in full effect here as far as the way he looks. Right from Marquardt and he scores a takedown. Shoulder shots from Nate inside Vitor’s guard. Ref stands them up after a bit. Low kick from Nate. Vitor backs him up with a couple punches and goes for a high kick. Leaping knee from Marquardt scores. Right from Nate. Jab from Vitor.

Round 2 – Front leg high kick from Marquardt after some exchanges. Nice short left hook from Vitor, Nate shakes it off but Vitor swarms him with punches looking like the old Vitor. Nate takes Vitor’s best shots there and is still here. Back to the center. Jab from Nate. Low kick from Vitor. Low kick and side kick to the knee from Nate. Vitor bleeding from the side of his left eye. Nate tunes him up with a couple nice kicks, one hard one upstairs. Punch combo from Nate. Nice right from Nate. Vitor faded after that big flurry at the beginning of the round.

Round 1 – Hard elbow from Gadelha off the break following a nice exchange. Claudia checks a leg kick, fires back with a body kick. Nice left from Karolina followed by a punch combo. Claudia gets underhooks and puts Karolina on her back. Claudia takes her back, gets the hooks in and chokes Karolina until she taps.

Round 2 – Nice right from Holloway. Left jab from Holloway. One two from Aldo, followed by another combo. Holloway lands a couple and then another solid punch combo. Left to the body, then a right to the chin from Max. Holloway with another one-two. Right high kick and left punch from Max. Quick jab from Aldo. His mouth is staying open though. Jab from Aldo. Max tells him to bring it on and Aldo scores with a combo. Max taunting him and pays for it with a couple. He fires back and Aldo fires back before the bell. Pretty close.

Round 3 – Body jab from Max, Aldo let’s him know a knee is waiting for him. Body jab from Max. Jab from Aldo. Holloway pressuring with punch combos now. Aldo whiffs and he pays for it with a big right from Max. Then a big left. Knee on the break from Aldo. Max fires back with a punch combo. Jab from Holloway, he drops Aldo with a combo and he goes for the finish. Holloway follows him to the ground with big shots. Aldo trying to hold on and survive from the bottom. Just over 2 minutes to go and Aldo is absorbing serious punishment. Max gets full mount and blasts him. Aldo gives up his back and Max is looking for the choke. Aldo rolls back over and gets mounted again. Holloway is brutalizing him. It could have already been stopped a couple times. Aldo gives up his back again and takes repeated punishment to the sides of the head until they just have to stop it. Aldo is left shaking his head in disbelief, then as reality sets in he lays his head down and looks up at the lights. Max Holloway is the undisputed UFC featherweight champion.