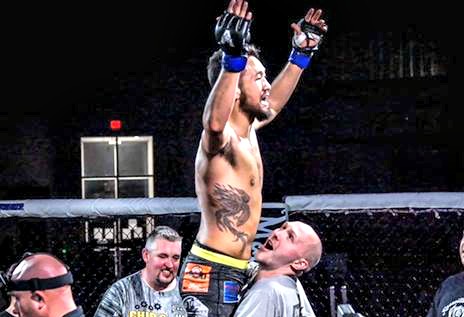 Before Jason King returns to action at Warrior FC vs. Valor Fights on May 6 in Corbin, Ky., LIVE on FloCombat, the hard-hitting Knoxville fighter checked in with ProMMANow.

Where would you be without MMA?

MMA, to a degree, saved me from myself. At the time when I was getting serious about MMA, I had a series of unfortunate life events and I was just the guy working a 9-5 and drinking on weekends. That was it. That’s what I did every week, week in, week out. Honestly, if I didn’t have MMA I could still very well be doing that – working a job I don’t like and doing stuff on weekends

Do you have any hobbies outside of MMA?

I’m a personal trainer at Frankie’s Body Shop. It’s my job, I get paid, but it’s also something I enjoy doing. I love working out. I know it’s not necessarily separate from MMA, but it is something I legitimately love doing. Other than that, I have three awesome dogs we take out pretty regularly. I bought a house recently, so I like doing that DIY renovations stuff. I say I like to do it, but I YouTube it, get angry, and eventually it gets done. But that’s about it, man. It’s a good life.

I saw Doctor Strange recently. It was pretty good. I rarely have enough time to myself to go see a movie. I’ve been meaning to see John Wick 2, all of my teammates say it’s a pretty good one too. Doctor Strange was good, even though I wasn’t really familiar with the character’s backstory – I came into that one with no expectations and came out pretty pleased.

It’s a book I go back to, a lot. It’s called World Religions. It provides a synopsis of the major religions of the world by explaining it in their terms. It’s something I enjoy. I enjoy being able to see through others’ viewpoints. Through religion, you get to really understand people and cultures in their own words. I think that’s a really enjoyable experience.

Favorite way to finish a fight?

I’m always gunning for the knockout. I started Tae Kwon Do when I was four years old. I enjoy grappling and submissions – I have a couple under my belt. But at the end of the day, if I can get a cool spinkick knockout or something crazy like that, that’s always going to be my preferred way to finish a fight.

Everybody around here knows that I’m a pizza guy. I love pizza. I stay good about it. I don’t eat pizza right after weigh-ins, just because I’ve been eating clean so long at that point – my stomach is kind of fragile as it is. I make sure I refrain from eating anything like that until the fight is actually over. There’s nothing like that first bite of pizza after a fight.