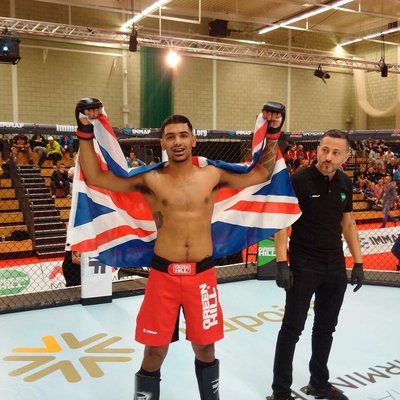 Hardeep Rai stands as one of the most talked about amateur MMA fighters today. The 20-year-old has amassed an impressive amateur record of 10-2, in which he went on to win 6 fights by finishing his opponents.

Your opponent, just like you, will be making his pro debut. What are your thoughts on him and how do you see this fight going?

I have done my research but there is not much information about him. I know he’s from Philippines and I know he’s a good striker. I have formulated the game plan according to it and I expect to deliver it. I see myself wining and I see myself winning quick.

Do you have any India roots?

Yes. My grandparents are from India, Punjab. My parents moved to United Kingdom and since then we’ve been there.

How does it feel to make your debut in India?

It’s honestly an honor to be fighting in India. I feel the blood running through my veins due to excitement. This is the biggest MMA card ever assembled in India. To be a part of it is truly an honor.

You make your professional debut at the age of 20. During this time most athletes chose to stay as an amateur. Why do you think this is the right time to make your pro MMA debut?

I absolutely think is the right time to make my professional debut. I have had 13 amateur fights, which is a lot for an amateur. I am ranked 3rd in the world and am ranked 1 in my country. I have won two titles. My skills are there, my fitness is there and hence I feel the time is right.

You will enter the fight as a favorite, given you have more experience as an amateur. How does it feel?

Have you formed a plan about what you’re going to do after the fight?

Thank you for your support. It truly is an honor. I love India, I love the country, I love the people. I am going to give a great show on Sunday.