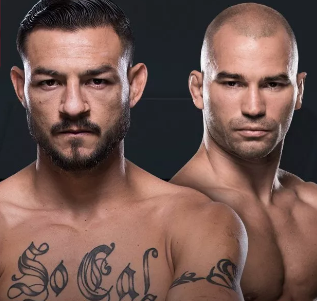 Featherweights Cub Swanson (24-7) and Artem Lobov (13-12-1, 1 NC) square off Saturday evening in Nashville, Tennessee in the main event at UFC Fight Night 108 from Bridgestone Arena. The event will broadcast live on FS1, with prelims on FS2 and Fight Pass.

Swanson is currently ranked No. 4 in the 145-pound weight division, while Lobov is not listed on the official UFC top 15 rankings.

Oddsmakers have Swanson the heavy favorite at -700, with Lobov the underdog at +500

Following a submission loss to Frankie Edgar in 2014 and a submission loss to Max Holloway in 2015, Swanson peeled off three straight victories last year. A trio of unanimous decision wins for Swanson in 2016 began with Hacran Dias in April, then Tatsuya Kawajiri in August, and Doo Ho Choi in December. The battle with Choi earned “Fight of the Night” and “Fight of the Year” honors.

Swanson is a 13-year veteran of the sport and has been in the cage with the biggest names, always seeming to come up just short of title contention. Lobov has not seen nearly as much success in the cage, nor has he faced the level of competition Swanson has been fighting for many years now. The biggest thing going for Lobov right now is he’s getting a lot of attention for being the teammate of Conor McGregor, and they are trained by the same coach, John Kavanagh. Neither of which are in Nashville to corner him.

Check out Betbright page by Freebets.uk to get hooked up if you are looking to wager online. But this is one fight you will probably want to stay away from putting money on unless you know something we don’t. Lobov just doesn’t have the experience, and hasn’t shown us that he’s ready for a top-5 guy. Not even close. He hasn’t beaten any ranked guys. There were a lot of questions about this matchup in the first place at it didn’t seem to make a lot of sense. Sometimes the UFC just needs a fight and this seems to be one of those times. Having said that, anything can happen in an MMA fight though and Lobov will have the same opportunity as any other man who gets inside the octagon across from Swanson. And one perfect shot is all it takes.