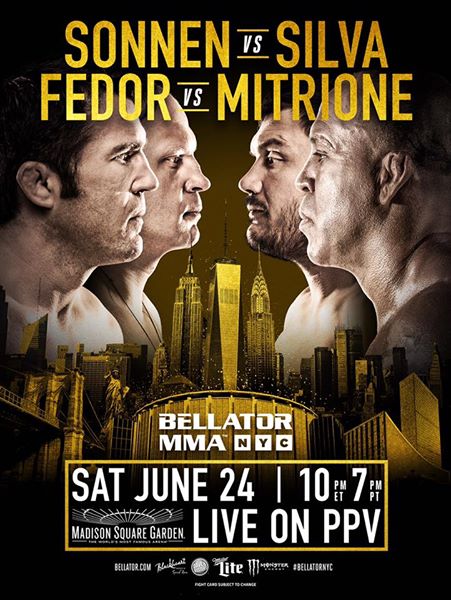 Bellator is bringing their brand of mixed martial arts fighting to Madison Square Garden in New York City on Saturday, June 24. The event will broadcast live on Pay-Per-View and is headlined with a bad blood light heavyweight tilt between “The Bad Guy” Chael Sonnen and his arch-nemesis Wanderlei “The Axe Murderer” Silva. In the co-main event, “The Last Emperor” Fedor Emelianenko will return to action against former UFC heavyweight standout Matt Mitrione.

The promotion has also added two title fights to the card as Douglas Lima defends his welterweight title against dangerous striker Lorenz Larkin and Michael Chandler puts his lightweight title on the line against Brent Primus. Larkin is making his debut in the promotion fresh off a successful run in the UFC and Primus will look to improve his unbeaten record to 8-0.