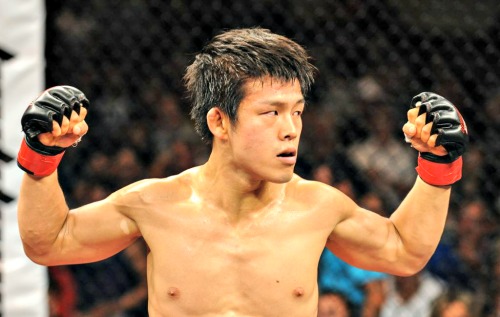 Before Tateki Matsuda tries to win his third straight fight at Pancrase 285 in his native Japan on Sunday morning, LIVE on UFC Fight Pass, the UFC vet sat down with ProMMANow.

How does it feel to be back with Pancrase?

It’s just another fight. International fights are always interesting. That long flight to Japan is never easy. All of my focus is just on being the best competitor out there.

Yeah, I would say so. Last time, my whole family was watching my fight. So that was new to me. That’s how it’d be if I were fighting at home. But when I compare the experience of fighting at the TD Garden, I still hear some crazy guys screaming at me, you know? I was born and raised in Boston and didn’t come here til I was eighteen year old kid. To have a kid like him rooting for me, it still feels like home.

What are your expectations for this next fight against Senzo Ikeda?

I‘m expecting a finish. If he tries to stay on his feet, that’s fine – we’ll kickbox each other. But if I see any opening, I’m going to take him down. I just want to show the American style of fighting. The Japanese style is a bit different from what we do.

With the victory, would you like a shot at the championship?

To be honest, I don’t really care. I just want to get back in the UFC, so a Pancrase title would be great. All of my focus is on Sunday, so I don’t think much after that. Every fight is very important to me.