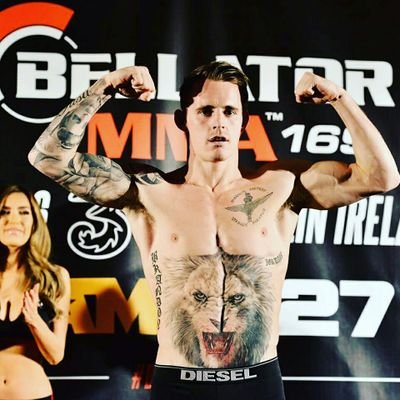 Cameron Else stunned the world when he knocked out undefeated Irish prospect Dylan Tuke in the very first round on Bellator 169. Holding a record of 4-3, with all 4 being finish wins, Else has gone on to destroy a few highly touted prospects like Patrick Pimblett and Garry Duffy, both undefeated when Else faced them. Else took some time off and opened up about his personal life and MMA journey so far to Pro MMA Now.

What got you into MMA? Who was your influence?

My best friend in the army David Kell got me into MMA, I was going through a rough time with getting into trouble fighting when going out with my army friends and one day he pulled me to one side and told me I need to sort myself because I will end up in prison. He told me that he found a gym called Semtex which teaches MMA so I went along with him and was instantly hooked. I went home that weekend and decided to play one last game of football and then I dedicated my life to MMA and becoming the best. It just so happens in that last game I played I dislocated my knee causing me to be out of training for around 9 months. But that didn’t stop me, I decided that I still wanted to come with my friend to every class and just watch it so that way I was still learning. It was an hour drive each time there and back. After so long watching on the sidelines I was able to start.

Did people around you support the decision of you taking up MMA as a career? What are the biggest challenges that you have faced so far?

The right people believed it was good for me to start doing as it help me and kept me out of trouble. I have found something that took away a lot of my problems in my life. My biggest challenges I’d say was on my pro debut I fought Spencer Hewitt at the time he was 12-3-0 at the time and just came off a loss to Cory Tate. A lot of people would say that I was silly for taking that on my debut but if I’m honest to myself I believed I could go in there and beat him. I had the best training camp ever and was in the best shape of my life. But the week of the fight I received the worst news I could face. As a man for the first time in my life I was broken, and over that week I received three types of bad news which made me question everything. I was a guy who was on top of my own world days away from a great fight for me then boom I hit rock bottom. I should have pulled out the fight but me being me if I give my word to fight I will show up and do that. That fight was the first fight that I felt nothing and from the walk to the cage my mind was elsewhere. I lost that fight first round. Spencer had choked me to sleep but I didn’t care I just needed to get out of the cage and try to rebuild myself. It was sometime after I had realized I fucked up a great opportunity and that I needed to take back what was mine. So I got a late notice fight. Stepped up and beat a guy in 55 seconds of the first round. I then went onto fighting Paddy Pimblet on Cage Warriors beating him in 35 seconds of first round. He was unbeaten and a UK top prospect. But I knew I would beat him easy and show everyone I’m back and nothing is stopping me.

After that fight I had two opponents pull out on me for Cage Warriors and I was told I won’t be fighting now as no time to get marched. So I relaxed off my diet and just chilled. I then get a phone call from my manager telling me Spencer Hewitt’s opponent has pulled out and do I want to step in. I said hell yes!! I was ready and I wanted to rewrite the books. Only problem was Spencer was dropping to flyweight instead of us fighting at Bantamweight. I ask for it to be at BW as I couldn’t make fly in such short time. Spencer declined and would only take it at fly. I didn’t want to miss the chance so I said fuck it, let’s do it. I had to cut 13-pounds in water and I collapsed after weigh-ins, it was scary times. The day after I was still in a really bad way. I had no IVs I just had to get in there and fight. I went three rounds, this time losing on points. I was exhausted after the first minute of round 1. After the fight a week later I had to go to the hospital as my body was still broken from the cut. I had to have three IV drips as I was still dehydrated a week later. The doctors told me it would take up to six months for my body to start to feel normal. I was gutted, I had just beaten a top prospect and then lost a fight for reasons out of my control. Two losses on my record to the same guy sucked!! But that didn’t stop me because I know I am talented and can reach the top. These were just problems that had to happen to make me stronger in my journey.

You are known for finishing opponents. Of your four wins, all four have been finishes. What is your game plan when you enter the fight?

My game plan is simply to destroy my opponents. I want to break them in a way that all other competition has to take notice and will fear my name when the phone rings and my name is put forward to them. I come to fight and give the fans what they want to see. Someone who is looking to win in fashion not try to game plan so I can squeeze the win. This is a fight and if one has to lose to me winning on points is never you winning the fight.

Eduardo Dantas is the current Bellator bantamweight champion. Do you think in the near future you will be facing him? What are your thoughts on him as a fighter?

Eduardo is a very well-rounded fighter and I’d love to fight him soon. And it comes down to Bellator, it’s them that holds the cards. If they want to hide me they will, if they want to shine the light on me they will. I will just continue to get better and make sure I finish my future opponents in great style like I always do.

On UFC 207, Cody Garbrandt stunned the world by defeating Dominick Cruz to become the new bantamweight world champion. What are your thoughts on Garbrandt? Do you think if the rematch were to take place, Cody would win again?

I think Cody is a great fighter. He’s young and he is hungry and highly talented.
In a rematch I think Cody finishes Dominic inside three rounds. He solved the puzzle. Next fight he will just put it together a lot quicker.

One of your first victims was Patrick Pimblett. He has gone on to become one of the most popular featherweight fighters. Are you interested in a rematch?

I offered Paddy a rematch on FCC, I told the promoter I would fight for the FW title and I would go up in weight but Paddy didn’t want it. For me now I would fight him again and I’d finish him again. And he knows it. This question is really for him. Would he? He’d tell you yes but when it comes to it he will simply forget how to sign his name on the dotted line.

One of the most discussed topic today is fighter pay. Do you think the money made by 0an average MMA fighter is sufficient? What are your thoughts on a fighter union? Will you be joining it?

Fighter pay sucks on the bigger promotions. The smaller shows you can’t complain it is about you investing in yourself like I do. You make your money when you get to the big shows you would think? But now it seems like the ones with the money are the ones that want to keep it all and not pay us. A thing I keep bringing up is I think it’s wrong that the UFC allowed some of their top fighters who get paid the most a chance in winning the 50 grand bonus. I mean come on really?? Fighters earn 250k plus for fighting… then gets a 50 grand bonus? You know what … that money will be far more effective for a up and coming fighter on the prelims who just made 16k .. So I think you should only be entitled to the bonuses if your purse is less than the bonus itself. It would be an investment for the UFC itself. As then the new fighters coming through can survive and keep training hard without fear of not being able to survive.

Message for every fan?

My message to the MMA fans and my fans out there. Keep following my journey. Hard work and being persistent will pay off. I’m a real fighter and I speak my thoughts as they enter my head.

Also, I’d like to thank my sponsors who believe in me and together we will reach the top: Prospects Ltd, Dan Turner brick work, Petit Recruitment Solutions, Brown and Mason Ltd, BC Evens Plastering Ltd, Glen More Carpentry Ltd.