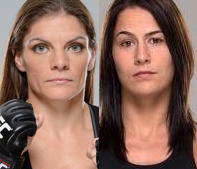 Lauren Murhpy (9-3) doesn’t understand why Jessica Eye (11-6, 1 NC) is even still in the UFC since she’s lost her last four fights in a row and five of her last six, so the 33-year-old MMA Lab product has been calling out “Evil” and things recently got turned up a notch on social media.

That actually reall funny cause I am told the bitch is cut from the ufc so I don't why she keeps flapping her mouth https://t.co/UVapvACGak

Lol you lying again, Jess. Im not cut. Ive been tellin the truth since day one- u dont deserve to be in the UFC on a 4 fight losing streak. https://t.co/V6nwJwxNnZ

do yourself a favor & quit trying to talk yourself into a fight that you're fighting ability will never be able to get you.

😂 you're right…I should have aimed higher than picking a fight with someone who lost their last 5 out of 6. I'm setting the bar too low… https://t.co/BvwXPla9gb