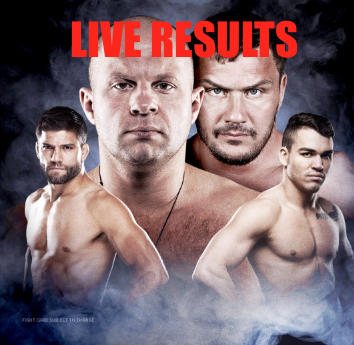 BREAKING NEWS UPDATE: MATT MITRIONE IS SUFFERING FROM KIDNEY STONES AND HAS BEEN PULLED FROM THE CARD. FEDOR VS. MITRIONE WILL BE RESCHEDULED. THIS SUCKS!! THOMSON VS. PITBULL IS NEW MAIN EVENT TONIGHT!!

Round 1 – Low kick from Mayo. Arteaga with a takedown but Mayo right back up and pushes her to the cage. Mayo takes her down and hops on her back looking for the choke. Mayo tries switching to an armbar but Arteaga takes top position and drops some shots. She lets Mayo up, lands a nice right. Mayo looking to have a bit of an adrenaline dump. She pushes Arteaga to the cage. They trade knees to the body. Accidental head butt opens up Arteaga’s head and he’s going to have the doctor check her out. They continue. Low kick, then a high kick from Mayo lands. Arteaga lands some good shots inside before the bell. Fairly close round but would give it to Arteaga.

Round 2 – Low kick from Arteaga. Nice uppercut from Arteaga. Nice low kick from Mayo. Again. She pushes Arteaga to the cage, looking for the takedown and she gets it and takes mount. Arteaga gives up her back, but ends up on top as Mayo looks for an omoplata. Mayo now looking for a triangle. She lets Arteaga back to her feet and they exchange with Mayo getting the best of that exchange. Clinch, knee from Mayo as she presses her to the cage. Arteaga with a few body shots before the bell. 10-9 Mayo.

Round 3 – Mayo misses a spinning backfist and pays for it with a punch combo from Arteaga. Arteaga with a nice right. They tie up and trade knees and punches in the clinch. Mayo presses her to the cage. Knee from Mayo on the break. Right from Arteaga. Nice punch combo and snaps Mayo’s head back with a right. This forces a shot from Mayo who gets the takedown, takes Arteaga’s back with both hooks in. Arteaga spins to top control, postures up with punches. Kicks her thigh and lets her up. Right from Mayo. Ref stops it for the doctor to look at her eye and he stops it. Mayo is begging him. It actually doesn’t look that bad and is not bleeding. She keeps pleading with him saying she can see. But it’s over. It is badly swollen and could be a broken orbital.

Round 1 – Fedor is in Tokov’s corner. Low kick from France. Right from Tokov as France pushes him to the cage. Tokov turns him around. Clinch battle here. Trip takedown from Tokov, lands in side mount. France gets him in full guard and he’s looking to secure an arm. Tokov landing a few shots. France goes belly down for an armbar attempt. France locks on a triangle armbar attempt but Tokov breaks free to his feet and France pushes him to the cage. Knee from Tokov to the body. Another. 10-9 France.

Round 2 – France connects first but Tokov lands a right and France flops to his back. Tokov postures up with a few big right hands and it forces the ref to step in for the stoppage.

Round 1 – Oli takes center quickly. Low kick from Oli. Kongo looking tentative, waiting. Oli pressuring. Low kick from Kongo. He connects with a couple punches. Left from Oli in return that stuns Kongo. Oli presses him to the cage. Low blow from Kongo halts the action. Nice jab from Kongo backs Thompson up. A right stuns him and he takes Oli down. Kongo in half guard, lands a big right hand. Oli gets to one knee and is back up, but Kongo still on him, lands a knee to the body. Kongo with a Thai plum and several knees stun Thompson before the bell. 10-9 Kongo.

Round 2 – Oli presses Kongo to the cage. Foot stomps from Oli. Clinch fighting, they trade knees. Kongo turns him around, looking for the double leg and gets it. Nice right hand from Kongo. Kongo with some heavy ground and pound here and staying busy. Oli looks for a kneebar but Kongo escapes and continues the assault. Kongo pours on the punches as Oli tries covering, but too many of these shots are getting through. Somehow Oli survives the round. 10-8 Kongo.

Round 3 – Body kick from Kongo. Oli looks to clinch and takes several hard knees to the body and Kongo puts him back on the ground with a double leg, gets full mount, then half guard. Kongo goes back to the ground and pound assault. Ref tells Oli to protect himself. It’s all but over really. Oli’s in pure defensive mode. Kongo pacing himself with a steady assault. Kongo back to full mount. Couple elbows from Kongo, more punches but Oli survives the round and fight. 10-8 Kongo.